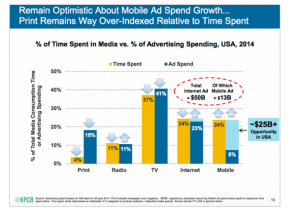 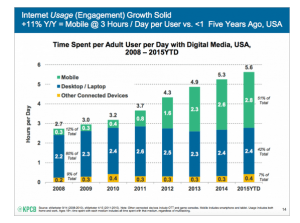 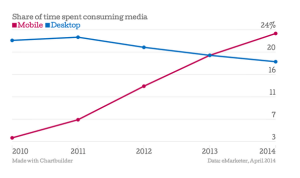 In 2012 Facebook became a “mobile-first” platform. By betting on mobile, Facebook created value for its users and increased its ad value capture, positioning itself to compete against Google.

How was value created? Facebook was the first social network to optimize the user experience around mobile. Value is created for users, creating new opportunities to access the platform (e.g. while commuting). The average user currently spends 20mins on Facebook each day and the average U.S. user 40mins. In addition to betting on mobile, Facebook created value for users through customization and enhancement. By customizing content (e.g. newsfeed) and creating a one-stop platform with new applications (e.g. video, music streaming), Facebook has managed to maintain an engaged user base.

Facebook creates value for users, but even more so for advertisers. This value creation then transforms into value capture for the company. Compared to the web, the mobile experience is fragmented across different apps and websites. As a result, it is more difficult for a company like Google to generate mobile ad revenue through a centralized search function. Google’s users are quickly diverted to other pages. Google’s share of the mobile advertising market declined from 81% to 68% between 2012 and 2014, despite its share of mobile searches growing. By contrast, Facebook’s users spend continuous, dedicated time on the application. This block of time is valuable for advertisers who display banner ads on the mobile app. Advertising companies also use Facebook mobile data to increase their ad conversion. In 2014, Facebook launched Audience Network as a means to monetize mobile apps through Facebook Ads. Through the platform, advertisers target users on mobile apps and websites, based on user data generated from the Facebook network. Social network activity and data have been increasingly competing with search data as a means to target users. Facebook’s wide and engaged user base, mobile-friendly experience, and data have attracted more and more mobile ad revenue over time. As of 2Q2015, mobile represented 76% of total ad revenue, or $2.9bn.

Facebook’s bet on mobile was a winning strategy. But what does the future entail? The company is expanding its users through platforms such as Whattsapp (900m) and Instagram (90m). It is also adding new monetization features, such as LiveRail video ads. Ultimately, to compete with Google on ad revenue, Facebook needs to engage new users, data, and user time. Identifying the next new communication platform(s) users will adopt is vital to succeed. In 2014 Facebook acquired Occulus Virtual Reality for $2bn. Virtual reality is often associated with applications such as gaming. But Facebook’s vast user network can expand this scope and allow users to interact in a virtual world. Facebook has demonstrated it can exploit digital trends to get ahead of user communication. In addition to making its content and applications more robust, Facebook needs to make the platform compatible with future user interfaces to ensure it remains valuable to advertisers. Virtual reality is promising but Facebook should stay on top of other trends impacting user interface, such as the Internet of Things. Lastly, Facebook should invest in Artificial Intelligence and other ways to continue improving the user experience and ad targeting.