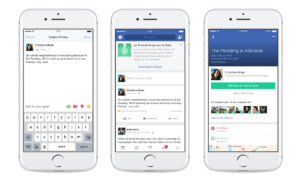 Facebook is no stranger to the game of disaster response. In 2014, Facebook introduced “Safety Check,” a feature that allows users affected by or in the area of a disaster to notify family and friends that they are ok by marking themselves “safe” on Facebook. This past fall, Facebook introduced a new tool to help with disaster response called “Community Help.” Community Help allows users to crowdsource help during a disaster; this crowdsourcing effort would look like a classified section where people could sign up to give or receive food, shelter, transportation, etc.[1] What constitutes a disaster? Right now, Facebook is only activating the feature during natural disasters in a few countries, but the company plans to test the tool for other use cases such as mass shootings or terrorist incidents, while also expanding to other countries.[2]

Not a Completely Novel Idea, But First at Scale

Facebook is not the first company to think about crowdsourcing help following disasters. Following the Boston Marathon bombing in April 2013, an anonymous person set up a Google Doc for people in the Boston area to offer help to those affected by the incident. After 24 hours, around 6,000 people had signed up to offer some sort of assistance to the bombing victims including places to stay, free rides, subway fares, and toiletry items.[3] 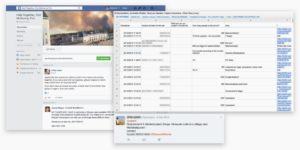 As of December 31, 2017, Facebook had 1.4 billion daily active users and 2.13 billion monthly active users.[4] Due to its incredibly large and engaged user base, I would argue that Facebook is the best positioned platform to create value by leveraging people around the globe to assist each other during times of crisis. Facebook also recently announced that it is partnering with for profit and nonprofit organizations to assist with its Community Help tool. Lyft, Feeding America, Chase, Save the Children, and other organizations have partnered with Facebook to make it easier for people in an area affected by a disaster to organize or receive help.[5] 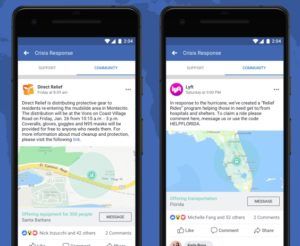 As far as capturing value, Facebook is not necessarily in the game of profiting from the Community Help tool. Facebook recently created a fundraising page that allows nonprofits to begin fundraising campaigns, and unlike other platforms such as GoFundMe, Facebook does not take a percentage of the raised funds or charge any fees.[6] It could be argued that the creation of Community Help may increase engagement and possibly lead to more advertising revenue, but I think that the company has enough other products to capture value.

Despite Facebook’s vast user base, I think that the company will have a hard time trying to get users to engage with the new tool. I would guess that most Facebook users right now do not even know about the Community Help tool, which creates a participation issue. However, this could be mitigated by Facebook simply notifying users in a region that experienced a disaster that they can sign up to help using the tool. Part of the participation problem is that Facebook has become a “busy” platform and I think has a difficult user experience. When logging onto Facebook, there are so many products, features, and pages that it is overwhelming to figure out all of the offerings.

I am also curious to see how Facebook will manage the interactions of users utilizing Community Help. How can Facebook vet the users offering to share goods? How can Facebook ensure the people seeking help were actually affected by a disaster and are not simply looking to take advantage of other people’s kindness? Will people affected by the disaster actually reach out to strangers for help? I think that it might be tough to convince people to not to feel ashamed or embarrassed to ask for help.

I am excited to see the Community Help tool evolve and think that it poses an innovative crowdsourcing solution to disasters that are unfortunately occurring too often.