Facebook is the world’s most popular social app and website and has amassed 1.86Bn MAU [1]. In this post, I would talk about Facebook’s Ad platform through which it monetizes its huge user base. 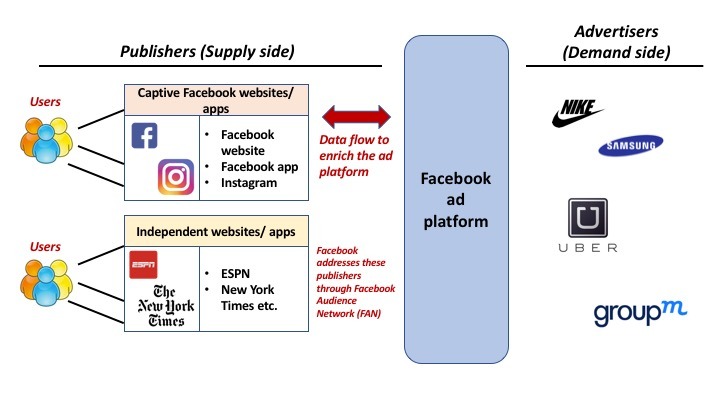 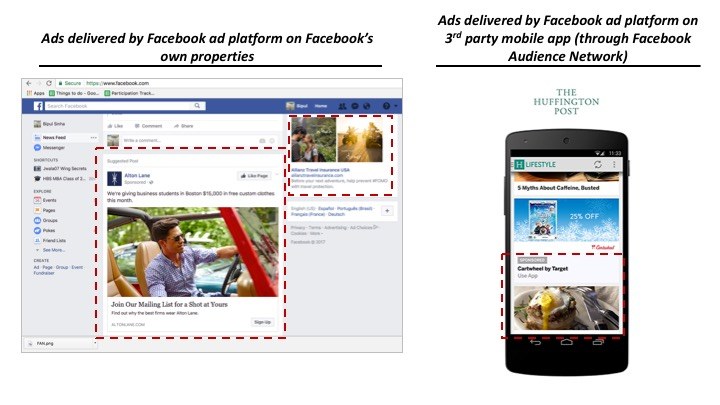 Facebook has lots of user data which allows its to provide highly targeted advertising. It also has worldwide scale, which allows advertisers to run worldwide campaigns. This utility of online ad platforms has been responsible for the explosive growth in the online ad business. Online ad spending is poised to overtake TV ad spending [4].

Facebook captures value from its ad platform by charging advertisers for its targeting and ad delivery technology. This is done in 2 ways. First, Facebook is a publisher on its own ad platform. This means that Facebook captures every $ that comes from the advertisers for ads shown on its properties (as it is both the publisher and the technology provider). For ads shown on 3rd party websites and apps, Facebook keeps a percentage of every $ from the advertiser (this % depends on the publisher’s bargaining power but is typically 40% for the platform owner). Facebook makes almost $1Bn annually from ads that it shows on 3rd party websites and apps and $25Bn from ads that it shows on its own properties [5]. 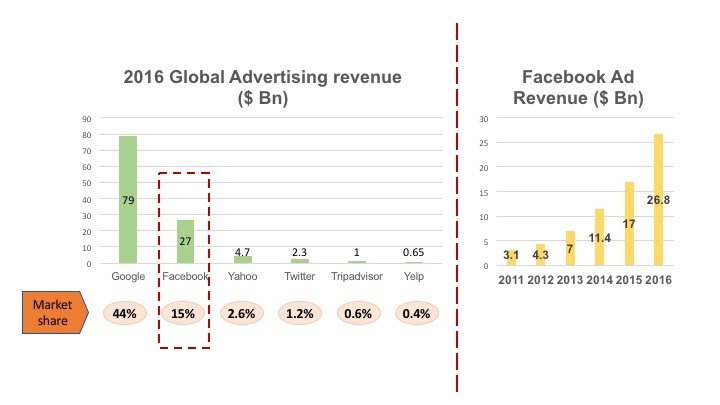 Indirect network effects: As the number of publishers on the platform increases, more advertisers wants to join so as to reach more users. As the number of advertisers increases, more publishers wants to join the platform as then they can have better fill rates and can get a better pricing for their inventory (known as CPM [7]).

Local network effects: Often times advertisers want to run a campaign in a specific geographic area. For e.g. Starbucks running a promotion in Seattle. In such cases, Facebook only needs to have a lot of users/ inventory in Seattle and not across United States and building this local network is not very difficult. Facebook is well positioned to benefit from this as its users are distributed all over the world.

Facebook has been using acquisitions to take advantage of local network effects in this industry. For e.g. Facebook acquired Instagram to get Instagram users, who belonged to a demographic group in which Facebook was originally weak, for its advertisers. Similarly, it tried to acquire Snapchat for $3Bn to get access to teenagers for its advertisers [8]. This could be seen as Facebook buying up “local networks” where traditionally it has been weak.

Facebook is well positioned to prevent multihoming on the advertiser side. First, it owns a lot of inventory (as it is the largest publisher on its own platform). Hence, advertisers cannot get access to captive Facebook inventory from any other source. Second, it has large amount of user data. Hence, its targeting capabilities are better than any other platform (only Google is in the same league).

There is some multihoming on the publisher’s side. First, publishers are wary of Facebook gaining too much control. Hence, they use sophisticated softwares that can route an ad request to multiple ad platforms (Facebook’s, Google’s etc) and then show an ad from a platform that is willing to pay the most to the publisher. Second, large publishers are relevant enough to ink exclusive contracts with certain advertisers.

Facebook is well positioned to continue reaping billions from its strong ad platform. It has diversified its publisher base by opening its ad platform to 3rd party websites and mobile apps. Therefore, it is protected even if the engagement on its flagship properties like the Facebook app goes down. Anticipating that VR would be the next big computing platform, Facebook acquired Oculus so as to be in a position to dominate ads on VR too.

[2] Every webpage or mobile app has certain screen areas designated for showing ads. These areas are called ad slots. For more information: http://www.iab.com/wp-content/uploads/2015/11/IAB_Display_Mobile_Creative_Guidelines_HTML5_2015.pdf

[7] CPM = Cost per mille = cost for delivering 1000 impressions on a publisher’s website. For more information: https://en.wikipedia.org/wiki/Cost_per_impression