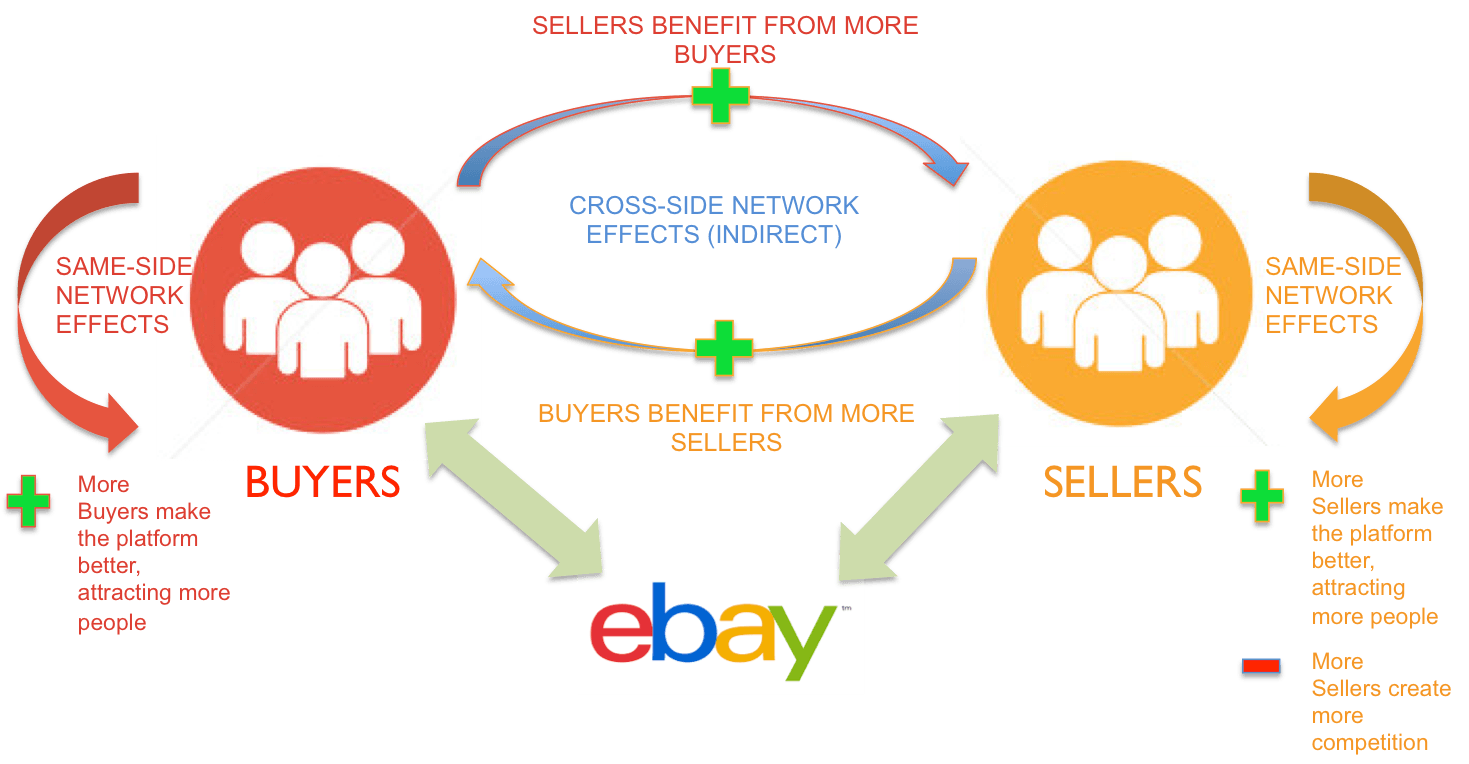 Network effects – and in particular, indirect network effects – played a crucial role in eBay establishing itself as the dominant player in the new world of online auctions in the late 1990’s. In establishing the site with the most sellers, and therefore, the widest product offering, eBay could then attract the most buyers, which in turn, attracted more sellers, and so on.

While players such as Amazon and Yahoo! failed in their attempts to unseat eBay’s dominance in online auctions and gave up about a decade after eBay’s founding, we can look even further back to the time of eBay’s founding, for other telling examples. Have you ever heard of Auction Universe (founded in 1997), or BidBay (founded in 1999)? Probably not, and with good reason – none of these early eBay ‘competitors’ exist anymore today. Interestingly, “some critics believed that the Auction Universe interface was more intuitive than eBay’s and included a better search engine; however, the site failed to […] displace the advantage eBay obtained from the [first mover] lock-in effect it had on a large number of auction bidders and sellers.”[2]

In fact, a very interesting example of a situation in which eBay failed because it missed out on that important first mover advantage is the case of eBay Japan. Yahoo! Japan started its auction site in September 1999, and quickly gained critical mass – soon amounting to 95% market share. eBay entered after Yahoo!, and by 2001, still had only 3% market share. Meg Whitman herself conceded “We’re definitely in catch-up mode,” but it was too late, and she pulled the plug on eBay Japan in 2002.[3]

This lesson naturally ties in to the next one – growing your network of users as quickly as possible at the beginning, as playing catch-up may not be an option, even with an equal product/service.

Before eBay was incorporated, the platform was run as AuctionWeb. Omidyar’s decision to offer the service for free for the first 5 months was a key one in attracting an initial base of users. “If you want to reach the network effect don’t leave it to luck, make it happen yourself”[4] – subsidizing users to achieve high and fast adoption rates was one method eBay got to a critical mass of users.

As Peter Thiel has said, many companies “tend to overlook [distribution]…Even if you have an incredibly fantastic product, you still have to get it out to people. The engineering bias blinds people to this simple fact. The conventional thinking is that great products sell themselves; if you have great product, it will inevitably reach consumers. But nothing is further from the truth.”[5]

eBay placed importance on building the right community, and generating word of mouth through collectors and hobbyists. Part of this involved giving people the ability to “talk (and perhaps eventually meet) people with similar interests.”[6] Getting free PR through unusual item listings also increased buzz and reasons for people to visit the site. After receiving $6.7M from Benchmark Capital in 1997, eBay also embarked in targeted advertising. However, actively encouraging people in the community aspect of eBay at the start was key in getting amplified, versus simply organic, word of mouth.

Examples of eBay’s strategy here include PayPal, eBay classifieds, and StubHub. Developing these complementary goods helps increase the ‘stickiness’ of the overall platform, as well as attract new users who may come in because of one of the complements.

By March 2002, shortly after entering China through EachNet, eBay had 80% market share. In May 2003, Taobao’s site went online, challenging then incumbent eBay, and by 2006, eBay had been completely wiped out, deciding to shut down its site. What happened?

One key reason worth noting here is that eBay entered the model with the same fees it had established by then in the US, while Tao Bao made all services free. Some food for thought regarding the power of subsidizing users.

Student comments on eBay – The Perfect Store(y) of network effects