Many of us are super familiar with the taxi / driver on demand apps. I would be very surprised if anyone here in HBS has not heard about Uber or Lyft. However, these are not the only companies in the world providing such experience, and, in fact, Easy Taxi has been the market leader in emerging economies.

The company, founded in 2012 in Brazil, is now present in more than 420 cities across 30 countries and has more than 20 million users. More than 400.000 drivers are affiliated within the Easy Taxi Network. The company, who has raised more than $70M in many investment rounds is backed primarily by Rocket Internet.

The networks effects are clear: Having more users will attract the entry of new affiliate drivers, and the entrance of the drivers will attract more users, given the improvement on service quality (availability primarily).

I truly believe that “growing fast and big” is super important when network-effects are present, and that’s one of the key reasons of company success in Emerging Markets. However, one of the main attributes has been its ability to adapt its business model without drastically disrupting the user experience. We have to remember that there are many things involved in the “Traditional Uber Business Model” that not necessarily will work as well as it has worked in developed economies, given differences in smartphone penetration, electronic payments, regulatory barriers, among others.

The operating model in many ways is similar of that of Uber: A platform that uses geo-reference tools to connect users and drivers. However, there are some key differences between the operating models. For example, Easy Taxi uses primarily “real taxis” within its network, and even though the app enables online payments (user –> platform –> driver), also enables the user to pay in cash to the driver, eliminating this relevant barrier in emerging countries (user –> driver –> platform). This unique feature has enabled a fast adoption, given that the gap between the traditional taxi experience and the new one is minimized. It has also enabled to have a strong driver “buy-in” given that instead of feeling threatened by the disruption, they are able to have more rides, minimizing idle times, working less hours and making more money.

I don’t suggest that Easy Taxi business model is flawless. In fact, the company has several challenges, such as background checks and quality service standards. But of course, the main challenge is the “war” against new entrants to these markets: UBER. Does having a relevant market share now ensures a victory for Easy Taxi? Definitely no! Especially given that the online payments wont be an issue for the next years, given the technology penetration growth in Emerging Countries. 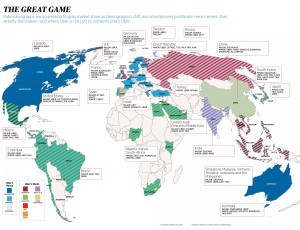 Clash of Clans: Network effects and stickiness in mobile gaming

Is it looking terminal for the Bloomberg Terminal?