Founded in 1989 by a husband and wife team, dunnhumby has been the customer analytics engine behind the success of many retailers, including supermarket giants Tesco and Kroger. dunnhumby originally gained notoriety for helping Tesco establish its Clubcard loyalty program and using the insights generated from the data collected to propel Tesco to overtake its rival Sainsbury in the 1990s to become the UK’s largest supermarket. Tesco recognized the value of deeply knowing your customer and bought a 53% stake in dunnhumy for £30 million in 2001 in order to maintain this competitive advantage. Tesco later increased its stake to 84% in 2006 and eventually purchased the remaining shares in 2010.  In the years that followed, dunnhumby continued to be a bight spot for Tesco by becoming a sizeable profit center in its own right. Today, dunnhumby works with nearly 40 retailers and 50 manufactures, netting Tesco $151 million in profits in 2014.

How they capture value: 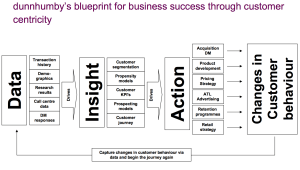 dunnhumby collects data on nearly one billion customers worldwide, mostly through its loyalty programs with retailers. More recently dunnhumby supplemented its offline, in-store purchase data with real-time data from online consumers via the acquisitions of BzzAgent in 2011 and Sociomantic in 2014. The ‘customer science’ company uses its proprietary analytic approaches and tools to translate this wealth of data into insights and actions that help its retail and manufacturer clients build loyalty with their customers.   dunnhumby then captures value by collecting fees as part of their long-term relationships with retailers as well as by reselling retailer data (and add-on analytics/services) to the manufacturers.

How they create value:

Let’s look at an example of how this win-win-win works in reality. In addition to helping Tesco overtake Sainsbury in the 1990s, dunnhumby is also widely recognized for helping Kroger enjoy sustained success from the implementation of their customer-centric strategy in the early 2000s. Like many other retailers, Kroger had been collecting reams of data on its customers convinced there was value in it. However, they struggled to unlock this value until launching dunnhumbyUSA as a joint venture in 2003. Since then, Kroger has been using dunnhumby’s analytic approach and tools to deeply understand their customer and design more personalized offerings. The most obvious example of this can be seen in the 11+ million pieces of direct mail the retailer sends to its customers each quarter. Each mailer includes 12 coupons targeted and designed specifically for the household that receives it. In fact, Kroger compares these mailers to snowflakes because if any two are the same, it is a complete fluke. The extreme personalization pays off as Kroger enjoys a 70% redemption rate and has generated $10 billion in revenue from the coupons according to Forbes. The insights have led to a number of other subtler changes as well including store location, design, assortment, etc. Small changes in these areas can have a big impact on the customer. Dave Palm, dunnhumbyUSA’s SVP of operations, provides an example: the “customer who buys peanut butter and jelly every week also regularly buys juice boxes—which used to be located on the other side of the store. That’s inefficient, given that customers spend an average of 16 to 17 minutes shopping. Kroger now stocks peanut butter, jelly and juice in the same aisle, or adjacent aisles.” By keeping the customer at the center of all decisions small and large, Kroger has been able to achieve remarkable success amid intense competition and a rapidly changing landscape.   The store has experienced 46 consecutive quarters of positive same-store sales growth, starting in the quarter following their initial partnership with dunnhumby. 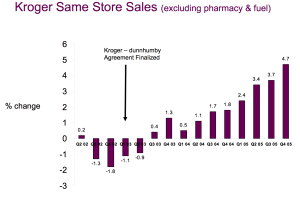 Earlier this year, Tesco’s new CEO Dave Lewis, put dunnhumby up for sale as part of a strategy to strengthen the companies balance sheet and reverse its recent ‘junk’ rating from Moody’s. Given dunnhumby’s successful track record it came as no surprise that Tesco was hoping to fetch as much as £2 billion when they appointed Goldman Sachs to explore options in January.   However, Tesco announced just last month that it was taking dunnhumby off the market as buyers (rumored to include at different points the likes of Google, TPG, and WPP) cut their bids to as low as £700 million. So the £1.3 billion questions is how did Tesco manage to destroy over half of dunnhumby’s market value in just nine short months?

The answer is simple: they forgot that the value you can create and capture from data is dependent upon the quality of the data in the first place. In haste to ready dunnhumby for sale, Tesco made two critical errors that left the company unsellable:

By cutting dunnhumby, and the potential acquirer, off from two of its biggest data sources, Tesco effectively broke the company’s operating model and destroyed what was once an extremely valuable asset that will take years to rebuild.

Caesar’s Entertainment: What happens in Vegas ends up in a $1billion database

Student comments on dunnhumby: how Tesco destroyed £1.3bn of value in 9 months