Domino’s Pizza is a traditional, mature brand that has discovered the benefits of harnessing digital crowds.  For a long time Domino’s has been forward thinking (relative to its peers) in using digital technology to offer more value to customers while better marketing its brand.   For example, its pizza ordering / delivery tracker provides real-time status updates for a given order.  Through this app, hungry customers not only track their orders, but also engage with the brand by sharing feedback and using social media channels to share their experiences.

Domino’s Pizza Enterprises, the Australian franchise of Domino’s, has taken digital technology one step further by leveraging crowds to create and market new types of pizzas.  Through a mobile app called Pizza Mogul launched in 2014, Domino’s has encouraged Australian consumers to create and name new pizza combinations and market their ideas via social media.  All pizza creations are immediately available on Pizza Mogul’s online menu, and users are able to search for and purchase their favorite pizzas; top designers (measured by # of pizzas sold) receive prominent coverage on a Leaderboard.  Within a few months of launch (mid-2014), the campaign had already attracted ~30K “moguls,” over 100K new designs and over 5K online videos with customers promoting their own pizza creations. 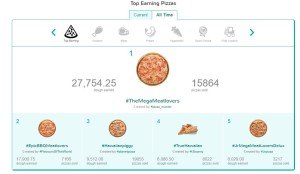 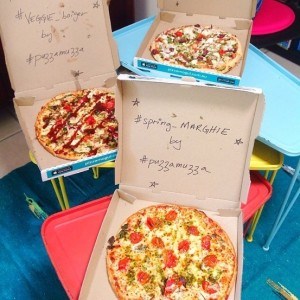 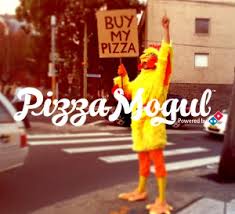 Pizza Mogul incentivizes customers by giving them a direct stake in any successful design; users whose pizzas are ordered by other customers will receive royalties from Domino’s (ranging between $0.25 and $3 per pizza according to one source).  “Pizza Master,” the top mogul, is responsible for #TheMegaMeatlovers combination, which has sold over 15K pies (over $30K in royalties)!  Like other crowdsourced campaigns, many consumers create and participate for non-monetary benefits (social engagement, simple enjoyment, etc.).   One of the key challenges with this type of campaign is maintaining momentum and keeping tail end users engaged – Domino’s has done so by promoting its “social hub” and adding other weekly cash prizes in addition to top selling mogul designs (e.g., #1 vegetarian pizza, creative award, etc.).  Interestingly, many of the participants are Domino’s employees, and according to one source 2 of the top 10 leaders work for Domino’s.

For Domino’s, the benefit of Pizza Mogul is less about the creativity / product generation as the scope of the innovation is inherently limited (set number of toppings to limit company’s cost exposure) and more about crowdsourcing serving as a low-cost marketing channel.  That said, the highest-selling creations suggest that there is unmet demand even for a mature brand like Domiono’s; by leveraging a crowd Domino’s has found successful product designs that were not available on its existing menu.  Overall, Pizza Mogul is a very well-aligned crowd source platform with benefits to both parties: customers receive royalties, prestige and other non-monetary benefits while Dominos gets the privilege of creative marketing and higher customer willingness to pay (larger, “more complex” orders which boost profits).  Domino’s has not disclosed the exact profit impact of this campaign, but my guess is that while the royalties to the best pizza designers seem high for the top moguls, on an aggregate basis this campaign costs very little given its marketing benefits – and the company may be profiting on net purely as a result of selling higher-priced pies.

Domino’s intentionally limited Pizza Mogul’s scope to avoid cost proliferation and to keep its execution manageable.  Again, the purpose was not product innovation but rather attracting high-volume of relevant entries with significant sharing of ideas across customers.  In my opinion, using crowdsourcing as a social marketing tool was particularly well-suited to pizza as it’s inherently a more social, fun product.  In evaluating the growth potential of Pizza Mogul, my instinct is that despite its novelty for many users, given its limited scope this is unlikely to ever transform Domino’s business model.  I would imagine the buzz of this campaign to wear off after a few months, particularly if the real value of participation is driven by monetary incentives (there are only a few highly-paid winners).  That said, I certainly think other brands should try to emulate the success of Domino’s crowdsourcing.  Similar campaigns are great ways of generating new ideas, particularly in the retail / consumer goods sector. At the very least, companies can leverage digital crowds through simple, well-managed campaigns to creatively endorse their brands and drive higher customer engagement.