In 2014, Disney rolled out the MyMagic+ trip planning and guest-experience enhancing program for its Disney World theme parks in Orlando. At the heart of MyMagic+ were MagicBands (see picture below), wearable wristbands with RFID chips that could store guests’ personal data and track their movements throughout the theme parks. Prior to a Disney World trip, guests can enter their trip itinerary details and credit card information via the My Disney Experience website, which is linked up with the MagicBands. Once guests are at the resort, they can enter the theme parks, check-in to Disney hotels, pay for food and merchandise, and store photos taken on rides and attractions—all by simply tapping their MagicBands to Mickey Mouse-shaped readers. 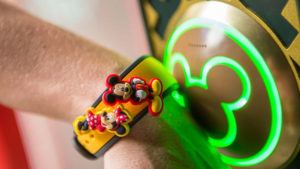 What was the point of introducing MyMagic+?

Disney invested more than $1 billion into developing the technology and infrastructure to support MyMagic+. The scale of the project was massive, requiring the training of over 70,000 employees and equipping over 28,000 hotel rooms with radio frequency reading technology. At the time the project was approved, the rationale was more or less the following: Disney World’s management team was alarmed when they noticed that key guest metrics, such as intent to return, were falling due to guest complaints about high ticket prices, long lines, and other pain points. With the investment in MyMagic+, Disney hoped that it could dramatically improve the theme park-going experience for guests with new generation technology, leading to higher guest spending and more return visits.

Indeed, MyMagic+ does seem to create value for both guests and Disney:

Has Disney been able to capitalize on MyMagic+?

From a guest satisfaction standpoint, it appears that MyMagic+ has been popular with guests. Bob Iger shared that about 90% of guests rate their experience with MyMagic+ as excellent or very good. It is unclear based on publicly available information how MyMagic+ has contributed to increased guest spending or return visits to Disney World, but initial reports have been positive. Disney indicated that average guest spending increased in limited scale trials of MyMagic+, and it’s reasonable to think that this trend has continued with the full roll-out of MyMagic+.

However, it is clear that Disney has not fully unlocked the potential value from MyMagic+. The original intent for MyMagic+ was to create a more technology-forward, interactive experience for theme park guests. While MyMagic+ has been integrated into a couple of attractions, there are many more opportunities for Disney to incorporate MagicBand technology into its guest experiences. For example, it’s surprising that the new Avatar Land at Animal Kingdom (scheduled to open in late May 2017) will not integrate MagicBand at all into its two major attractions. One explanation may be that Disney’s Imagineers are skeptical of MyMagic+ and do not want to rely on it when developing their attraction concepts.

Disney has also collected a wealth of data about its theme park guests that is has yet to utilize. Valuable data about guest preferences could be used to target advertisements and promotions. Imagine that Disney analyzes its guest data and is able to segment by fans of its popular franchises, such as Frozen or Star Wars, based on the attractions and shows that they went to at Disney World. Disney could then use this information to target fans with customized advertisements, such as for the upcoming Frozen musical or Star Wars movie. It could also send along location-based discounts and promotions while guests are at the resort to encourage higher spending. On a broader scale, Disney could also leverage the data to gain customer insights and make better decisions about new investments in attractions and improvements in operations.

What are the challenges for MyMagic+ moving forward?

As people grow more comfortable with uploading their personal information onto their smartphones, the concept of having wearable MagicBands may not be necessary. The next iteration of MyMagic+ technology may focus on creating a highly interactive mobile app that delivers the same type of experience that MagicBands do on smartphones. If this is the case, Disney will have to make adjustments to its technology infrastructure and operations to better integrate the mobile app.

In addition, competitors such as Universal have started to experiment with smart wristbands as well. Universal’s Wet ‘n Wild water park tested special RFID wristbands that allowed guests to wait in virtual queue lines for attractions (kind of like a virtual FastPass system). If competitors are able to invest in similar types of technologies more efficiently and integrate them into their parks more effectively, then Disney must figure out other ways to innovate on and elevate the guest experience to keep up.

Amino: Taking the Guesswork out of Healthcare

Palantir – Big Brother is Watching You