Despegar is the leading air and hotel online booking service in Latinamerica, and one of Argentina’s tech unicorns. The company was founded in 1999 by Roberto Souviron, a graduate from the Duke business school who, when having to book a flight for his graduation from Buenos Aires, noticed the need for a platform to facilitate the purchase of an airplane ticket to help people avoid long lines in an airline counter and to provide an alternative to old fashion travel agencies.

Despegar quickly expanded across Latinamerica and absorbed competitors to establish itself as the leading online booking service in the region. Even though it is present throughout Latinamerica, countries from where they get the most traffic are Argentina, Brazil and Mexico, as well as expats of those countries living in the US.

Even though is started exclusively as a platform to purchase airplane tickets, by 2009 the company incorporated hotel bookings to its platforms. This revenue stream became one of the most important and will be the focus of this essay. The company went public in 2017, and the stock has had a tumultuous path, dropping in value over 50% since its IPO (disregarding the recent COVID-19 market impact). 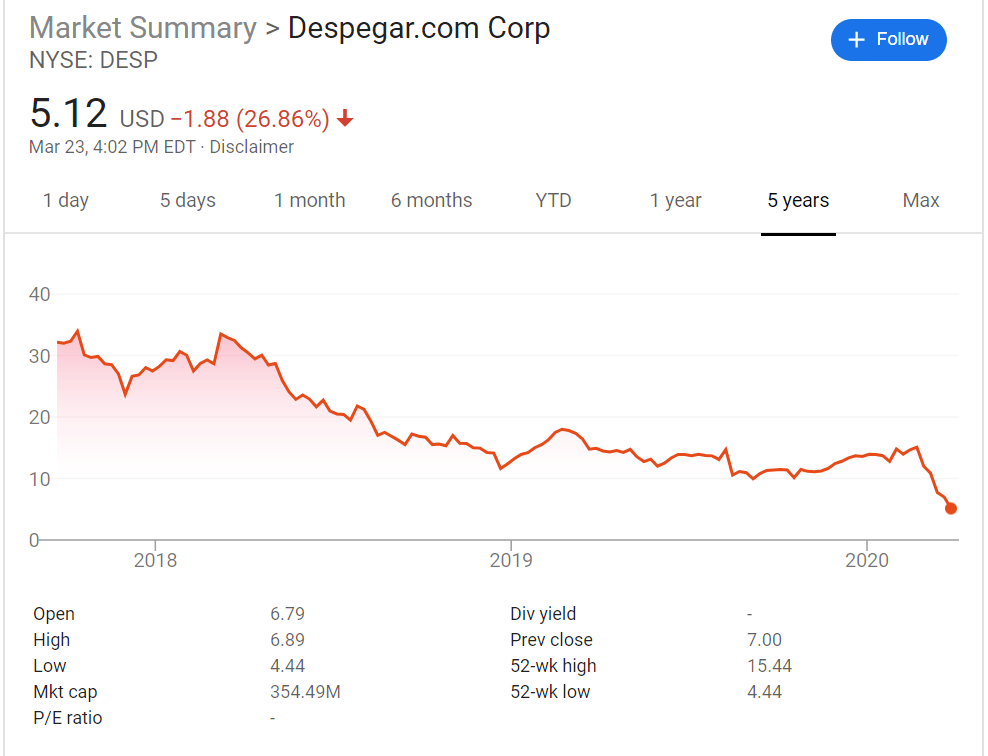 When we think about the fundamental properties of networks, Despegar has taken action in trying to bridge itself from vulnerabilities in several of these fronts. However, these efforts have led to different levels of success, and it may be in this analysis where we can find one of the sources for its rocky stock performance.

One of the major characteristics of platform businesses and one of the main drivers for growth is how strong the networks effects are between players in the platform. In the case of Despegar, the cross-side network effects are abundantly clear. The more users the platform can acquire in terms of how many people search for and book their hotels through their site, the more incentives hotels have to post on Despegar. Additionally, the more hotels Despegar can add to their platform, the bigger the incentive for users to go into their site as a one stop to arrange their holidays. The cross-side network effects are evident and mutually self-reinforcing. Additionally, Despegar has also built features to try to develop same side network effects between buyers. One of the major drivers behind a consumer’s choice of hotel is the rating and past comments that past guests have left for each establishment. By having more users stay and rate each hotel, the more information they provide for future potential guests and the more robust and trustworthy the platform becomes. However, this is far from an innovative feature, most companies in the business have this feature in some form, so even though it does contribute to creating same side network effects, it is hardly a competitive advantage.

Despegar generates value by connecting hotels and potential guests and facilitating the transaction. The company captures value in the form of a commission, a flat fee over the total transaction between both parties. However, this comes out of the total revenue a hotel finally gets, and also increases the total amount a guest would pay for his/her stay. Therefore, the risk of disintermediation, by two parties looking to minimize their costs, still exists. To prevent this, Despegar aims to enhancing the value they generate for their users to disincentivize disintermediation.

Despegar incentivizes users to transact on their platform by guaranteeing the lowest possible price. It has achieved such a scale in the region that it has the power to negotiate with their hotels a lower fee than what they would offer to a client directly. However, for the hotels that do not agree to this, Despegar also delivers value by facilitating the operation. Users could just use Despegar to pick their lodging and then book directly with the hotel at a lower cost, but they offers their users the trust of operating directly with a well-known regional company instead of some unknown hotel in potentially a foreign country. Additionally, and what is very important in Latin-American countries, a lot of them subject to inflation and exchange rate risk, Despegar offers the possibility to hedge against this by paying in installments at a fixed exchange rate. This way, users can smooth out the total cost of their lodging across time and they can also protect themselves against macroeconomic variables outside of their control. This, on top of local payment methods in most countries, not only add value for users but are also a competitive advantage that is hard for international competitors to match.

However, this is not enough to protect Despegar against the threat of multihoming. There is no way to prevent hotels from posting in other platforms, neither Despegar nor any competitor has ever achieved enough market share to enforce this on hotels. Additionally, posting management software allows hotels to post in multiple platforms very seamlessly, so there is no incentive to not post on every site available. This makes it harder to have a competitive advantage in terms of supply. Additionally, giants such as google, who already own all the traffic, have started entering the market in recent years by providing similar, although inferior, functionalities and are taking market shares away from companies such as Despegar and Booking.

It will be interesting to see if Despegar’s local approach is enough to compete against global players who have enough capital and traffic to apparently dominate every industry they choose to enter. So far, investors haven’t been bullish on what once was one of Latin America’s most beloved unicorns.

Intuit Quickbook Desktop OR Quickbook Online – what to choose?

1 thought on “Despegar: from tech darling to struggling business”