Not only has the construction industry not advanced in 60 years, it has actually devolved. Can crowdsourcing reverse that reversal?

In post-war 1940s, Levitt & Sons of the famous Levittown movement set up and operation that built 30 houses per day.  A Levitt crew would arrive to an empty plot of land in the morning and leave with a finished house at the end of the day. Here they are in action:

Nobody is building a house in a day today. While nearly every other industry, from auto manufacturing to cranberry processing, has vastly improved its operations to benefit speed and cost of production, residential construction is happening in basically the same way it was hundreds of years ago: select the best general contractor for your needs, haul a bunch of locally sourced materials to a site, work at that specific site for many months and hope for the best.

One potential answer for bringing the construction industry into a modern form of production is prefab and modular construction: build the house off-site, truck it to the site, and assemble it in a few days instead of several months. While I have high hopes for prefab and modular, through decades of trying it has yet to become mainstream or even very popular with a niche crowd. 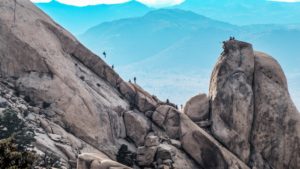 The convergence of digital and commercial transformations

I wonder if we could improve construction through highly coordinated crowdsourcing of individual tasks.

You could start with the conceptual design (Mati covered that here), but crowds of professional designers should be able to complete the detailed construction drawings that are required for construction once the concept is settled, crowds of engineers should be able to review and modify the drawings for structural integrity and environmental engineers could be dispatched from the crowd to the site to review conditions and assure conformance to site-specific needs.

Beyond design, with detailed plans completed the home could be broken into micro-assemblies to be completed by the best individual for the job. Some of these tasks would have to be local but many could be remote. You could imagine a local “crowd” of tile layers competing do complete a bathroom, or an eventual “crowd” of bathroom makers that could finish the entire bathroom as an assembly and ship it to the site for integration into the build. Individual pieces of furniture from the interior drawings could be crowdsourced for purchase or creation.

Crowdsourcing construction would combine the necessity of some assembly happening on site with the pre-fab idea of modularizing components of the house, with the difference that existing pre-fab companies want to assemble all of those components themselves whereas the crowd could potentially do a better job if they are only working on the thing they are best at. Today most general contractors and pre-fab companies are jacks-of-all trades but wouldn’t you rather have the best cabinet maker in the country make your cabinets and the metal worker craft your railings?

Its not obvious that crowdsourced construction can happen right away. It will require very precise drawings so that every detail is figured out in advance, down to the screws and wires, rather than designed and decided on the fly (such software is just now becoming popular).  Standards that govern each component will be key – no longer can a local tradesman build the bathroom around what is there but a remote team will have to build it to exacting standards as will every other component maker so things fit together on site. Finally, the cost of shipping components long distance will have to be optimized and offset by lower local building costs.

You can imagine the result would make an impact. Fabricators all over the world could compete to work on what they are best at – no longer would you be limited to whatever projects are available in you local area, potentially bolstering rural economies. You’d unlock the cost savings of building things you know how to build in controlled environments (your warehouse or garage instead of ever-changing build sites) and those things would be better because you’d build what you know best and would have won a mini-competition to get that project.

If done right, crowdsourced construction could result in better homes built faster and at lower cost, with fewer headaches.

(1) h/t to Peter Rose for the Levittown history

Applause: Solving testing pain point with the power of crowds