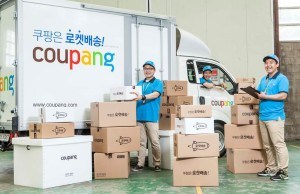 Coupang is a leader in the Korean mobile e-commerce space. It has recently raised a billion dollar round of funding from Softbank this year and it could provide them with the ammunition to change and disrupt the country’s distribution structure of consumer goods. One of their strongest attributes is their dominance in the mobile e-commerce space with over 70% of their 2 billion dollar in gross sales coming from the mobile space. Through a strategy that took in to account of the conversion of internet consumption through mobile devices, indirect network effects, and customer centric focus, Coupang has emerged as a leader in the future of commerce in Korea.

Coupang originally started off as a Groupon clone in Korea. As the business grew they realized that they could reach more customers at scale through offering deals that were deliverable through mail rather than offering local deals that capped revenue because of the nature of restaurant’s, beauty salon’s etc. being limited in capacity to serve customers. So the company focused on providing excellent deals of consumer products such as electronics, baby products, essentials, fashion, and make-up. Their business model was different than the initial e-commerce players in that it was a push based curation model where the customer would visit the sight habitually not knowing what they wanted to purchase. Other players in the space, mainly eBay, had a pull based model where customers visited the site knowing what they wanted to purchase and searching for it. The offers on Coupang was curated so that it would attract customers that liked getting good deals for exciting products. The user experience made it easy for customers to swipe through products and browse and discover products through their small mobile screens rather than use eBay’s more mobile shopping app that was more suited to PC web commerce. Because eBay’s customers would have a huge number of categories and SKUs to choose from in a small screen, users gravitated to using eBay on the PC. On the other hand, Coupang customers often used the service to “window shop” and browse through curated content on their way to work or when they had a short break (competing with mobile games for user timeshare). 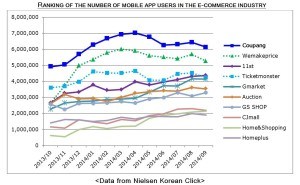 As the company grew exponentially through aggressive marketing and customer acquisition, there was an indirect network effect between sellers and the company’s customer base. The more customers that joined, the more sellers with attractive products wanted to sell through Coupang, and that in turn brought more customers to site/app. In a matter of six months of starting the service, they acquired a million customers, then reaching five million customers another six months later. In less than three years, 2 out of 5 Koreans (population of 50 million) were a customer of the company. Because of the buying power of the customers, Coupang could negotiate low prices for their customers. The company was able to capture more value for their customers, increase customer loyalty, thus fueling the indirect network effects even further. For the sellers, they would get the benefit of a huge increase in revenue albeit a smaller margin. Off-line distribution was on a down turn with negative growth YOY and the big chains such as Emart (Korean Walmart equivalent) and department stores were hard to get in to. Other competitors in the e-commerce space could not generate as much revenue especially given the mobile dominance that Coupang was having. This in effect increased the selection of exciting quality products offered through the service thus attracting more customers. 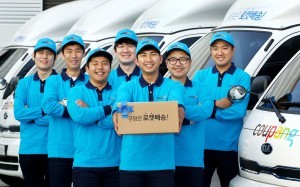 Central to their strategy was a customer centric focus on satisfaction and differentiated service. They have consistently won many prestigious awards for innovations in the app space and more importantly customer satisfaction awards in the e-commerce space. Most recently, the company has emulated the Amazon business model of taking on inventory and fulfillment. They have gone a step further and vertically integrated delivery service as well. They invested in building fulfillment centers and bought a fleet of over 1000 delivery trucks to fill the last mile void which was a major pain point in customers’ experiences of e-commerce. Incentives of the delivery companies’ employees were not aligned with customer satisfaction in that employees were not evaluated for being exceptionally customer centric when delivering packages. They hired their own delivery employees and put them through training and aligned incentives with the company’s values. Through vertical integration of fulfillment and delivery, Coupang was not only able to deliver faster than competitors, but also control the experience of their customers, thus increasing customer satisfaction significantly. They have made big investments in off-line areas to further solidify their foothold in the digital e-commerce space and it seems like it’s paying off.

There are a lot of unknowns in the lightning quick digital environment and even more unknowns if you a start-up that is only 5 years old. However, signs point to Coupang being a winner in the digital space of distribution and retail so far. Most of the giant off-line retailers are trying to play catch up by investing in apps and online marketing and online competitors have since updated their apps to be similar to that of Coupang’s. However, there are industry sentiments that they are not sustainable because of the high operating losses they incur due to their aggressive expansion in to the off-line sector and pose regulatory risks as well from the Korean Ministry of Transportation for the violation of delivery services as a business. Coupang will need to address some of these questions and doubts in the coming years.

Here are a few links from various media sources that covered Coupang’s story.

Student comments on Coupang – Changing the face of retail and distribution