Having worked in television prior to coming to business school, I am naturally drawn to the media space to address this topic. I will not be in the least surprised to see my classmates writing about Netflix, YouTube, Amazon, and other over-the-top (OTT) providers, as media disrupters and winners. While it is difficult to write a paper around media disruption in the television industry without acknowledging these players, I’d like to argue that traditional cable, and Comcast specifically, is still winning and will continue to win.

Currently Comcast is the largest cable provider with over 27mm customer relationships, $68.8bn in revenue, and $14.9bn in EBITDA.[1] Even amidst OTT competition Comcast has consistently leveraged its existing assets to create new opportunities, continued to be a digital innovator, and re-focused its business on its most profitable customers.

Starting as early as the 1940s, innovators began creating the infrastructure to deliver cable services.[2] Those wires in the ground have continued to be cable’s greatest asset, and the way in which the industry as a whole creates value. Comcast has led the industry in major initiatives to further leverage these assets. One example is in home security. In 2010 Comcast debuted Xfinity Home, its push for a cut at the $13bn home security and automation market.[3] This sticky product has increased subscribers and further solidified Comcast’s position as a smart player inside the home. Comcast continues to innovate in this category, forming partnerships with additional players in the space such as Leeo and SkyBell, as well as releasing an SDK certification program to make it easier to partner with the company.[4] In class we’ve been talking a lot about Google, Apple, and others trying to find an entry point into the home, but I believe no player is better positioned to take advantage of the smart home than cable, and as the largest provider, Comcast is uniquely positioned to lead the charge.

Even with regards to video, Comcast’s has done a phenomenal job transitioning into the digital age. In the face of OTT players it has created Xfinity TV. Its sleek UI both for the traditional TV product and its digital Xfinity app, provide its customers with a seamless and easy to use experience. Furthermore, through its NBCU acquisition it inherited a 32% equity stake in Hulu.[5] Comcast is well poised to take advantage of the transition of content to OTT through these two services.

A common misconception around Comcast relates to their changing subscriber base. People see Comcast losing video subscribers, and companies like Netflix gaining subscribers, and think it’s the death of cable. However, as programmers raise price on cable providers, video subscribers are increasingly unprofitable for cable providers. In fact, I think within the next 5-10 years if cable providers hang on to their video business it will actually be a completely unprofitable business line. However, as shown in the graph below, while Comcast is losing video subscribers, they are actually capturing more value through gaining profitable high speed data subscribers. This will position Comcast to continue to be a leader in the space, and to leverage its infrastructure to build new more profitable businesses. Furthermore, in thinking about OTT services, it is important to remember how those services are delivered to the consumer – cable providers. Everything still has to pass through the pipe. Seeing that it would cost nearly $80bn to overbuild the entire US, cable will continue to be a major player for many years to come.[6] 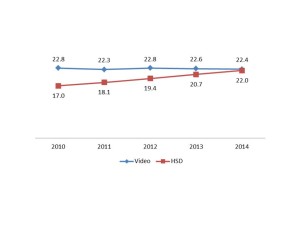 Cool to be fit? Another Hipster trend monetized.

Student comments on Comcast: A Winner in the Media Long Game