Shopify’s powerful eCommerce platform allows merchants to launch eCommerce stores in minutes, not months. With Shopify, merchants have access to countless out-of-the-box features that allow them to strike the right balance between incorporating features proven to increase sales and ensuring their unique brand image is represented through their site. Before Shopify, small merchants struggled to create and maintain digital storefronts. Building sites from scratch is complex and expensive, and though solutions like Amazon give merchants a way to reach larger audiences, they offer merchants little control over the shopping experience. With Shopify, merchants can build storefronts that provide rich, unique customer experiences without software development expertise and without managing the complex vendor relationships required when building a site from scratch.

Core to Shopify’s innovative platform is its developer and partner ecosystem. The developer network allows 3rd party developers to build applications that extend Shopify’s native functionality, while the partner network encourages freelancers and design agencies to become ‘Shopify Experts’ and help Shopify merchants create and customize their storefronts.[2] Recently, Shopify enhanced its app store with machine learning algorithms to measure the results that different apps deliver and provide merchants with personalized recommendations that are well suited to their stage of growth.[3] By emphasizing the contributions of the design and developer communities, Shopify turns potential competitors into partners while also vastly expanding their reach. Historically these professionals would contract directly with merchants to build and maintain storefronts, but due to the high costs of these relationships, this route was closed to many small merchants. 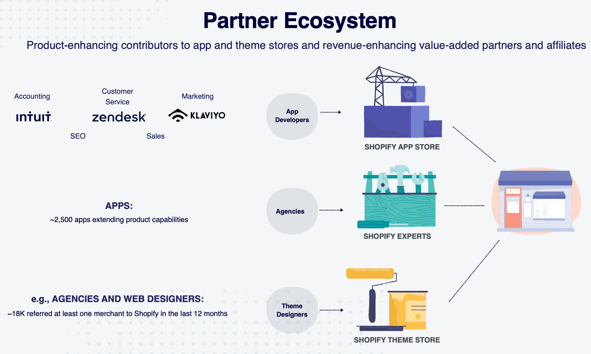 Though Amazon is the enemy of many eCommerce businesses, Shopify has aligned itself with Amazon by making it easy for merchants to categorize and list products according to Amazon’s format and track Amazon sales all via their Shopify account.[5],[6] Though in many cases merchant success on Amazon leads to Amazon entering the market and effectively cutting out the merchant, Shopify merchants are often small and sell niche items that do not attract Amazon’s attention. [7] By providing integration to merchants, Shopify makes it a no-brainer for merchants to use both platforms (rather than picking one – because in many cases merchants would choose Amazon due to its reach).

Another important component of the Shopify platform is its integrated payment processing solution. All eCommerce merchants collect payment from their customers, and every eCommerce platform offers integrations with a number of payment processors (e.g. Stripe, Vantiv, BlueSnap, etc), but often these solutions require relationships with the payment provider. Shopify Payments, however, is an out-of-the-box integration with Stripe that allows merchants to begin accepting payments from customers immediately without any separate accounts.[8] Shopify does, of course, earn revenue on all payments processed on their platform, but the rates that they offer merchants are very competitive. And, the prospect of this additional revenue incentivizes Shopify to continue developing tools that drive merchant revenue sales.

These features of the Shopify platform create strong network effects. Shopify continually enhances the platform to drive growth in order to earn incremental payment processing fees. Merchants are attracted to the simple yet comprehensive platform. As they see revenue growth, merchants utilize partners and 3rd party apps to further develop their eCommerce stores. Shopify’s growing customer base incentivizes partners and 3rd party developers to join the ecosystem, and app recommendations from the machine learning algorithms improve as the customer base increases. As this entire ecosystem grows, the platform becomes stickier because merchants would struggle to replicate the integrations and channel distribution functionality with other eCommerce platforms.

EdX: The Path to Learn for Career