Clubhouse is an interactive audio-only social platform. Users can join audio-only conversations like joining a group of people chit-chatting around an actual clubhouse. Once you leave, so does any record of the conversation. This makes for some interesting conversations, but the dynamic on Clubhouse is completely different from any other social media platform. On Facebook, YouTube, Twitter et al, users share their message, which is often relatively short, and then maybe they’ll engage in some shallow dialogue in the comments before moving on to something else. On Clubhouse, though, users will often carry on in-depth, engaging conversations for hours — sometimes even more than a full day. And rather than constantly pitching their products or services, most users are freely and transparently sharing their knowledge to help others achieve their goals.

The unique collaborative nature of social media platform interactions stems from a carefully curated list of initial users. These users were then allowed to send invites to their network and so on and so forth. Because they started with the right people who formed the culture of the platform, and then had those people slowly bring on new users who were indoctrinated into this culture, the result was a powerful and nurturing environment in which participants could gain access to contacts and opportunities that were previously far outside their reach.

Brands are already spending millions in curating communities and tailoring messaging via influencers and social media accounts. This trend of smaller more intimate settings is certainly on the rise in the midst of noisy overcrowded platforms. This is how Clubhouse is creating and capturing value, at least for now. Like snapchats claim to fame, Clubhouse too does not record or provide the ability to rewind any of the conversations. It is almost liberating to many users. This is yet another example of value creation.

However, the points mentioned above cannot be sustainable. For Clubhouse to retain members and maintain the ambitious monthly active user rate, it will have to create and capture more sustainable value.

For now, the app benefits from the presence of celebrities that as one expects, has drawn large crowds to the platform. And since you can only join by being invited, the demand or it’s perception at least, has been driven up significantly. The biggest of these was Tesla founder Elon Musk, whose recent Clubhouse appearance broke the 5,000 person limit for a room, and saw users creating secondary listening rooms and live-streams on other platforms to follow the conversation. Clubhouse has also hosted a live-reading of The Lion King musical, while even Facebook CEO Mark Zuckerberg recently joined a Clubhouse chat – no doubt to take some notes for Facebook’s coming duplicate feature. As the hype has grown, so has the app’s audience, with Clubhouse going from 600,000 active users in December, to 2 million just over a month later. It would be interesting to see how the founders, Paul Davidson and Rohan Seth, capitalize on this wave to create and capture long-term sustainable value.

The platform does provide an opportunity for authentic conversations between a diverse set of speakers. You may find yourself in a room with a competitor, a celebrity investor, or a rising social influencer. One can use this to build a professional network, to market or launch a new product, to run marketing and advertising campaigns, or to even crowdsource ideas for all of the above. This then perhaps is where the real value creation lies. Afterall, how many social media platforms do not currently require you to constantly look at screen. Clubhouse lets you use it in the background and be a passive participant. Clubhouse could even charge for access to premium quality rooms and could someday even become the content creator like Netflix or Prime Video. By changing the way people find, engage, and derive value from the platform, the creators can drive long-term value creation and capture.

The platform will soon face competition as well. Twitter, for example, is testing out a similar concept called Spaces. If the main draw to clubhouse was celebrities, there will be a significant proportion of users that will jump ship and resort back to a familiar platform with a new feature, i.e., Twitter and Spaces. Another hypothesis is whether the app will thrive in the post-covid world. Some of the initial hype could be attributed to the covid mandated lockdowns. Currently however, the company has certainly made a dent and has people talking about it, recommending it, and asking for invitations to join the platform. 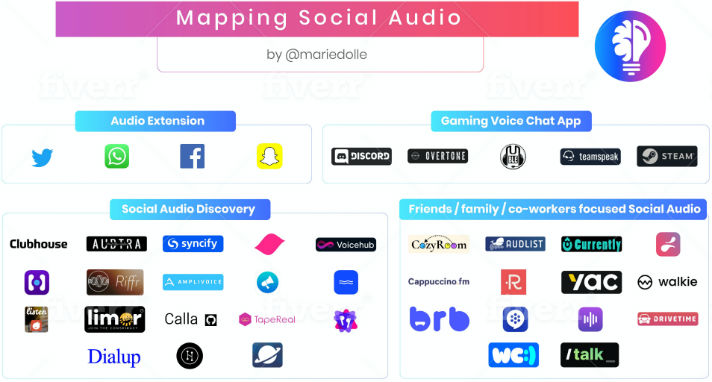 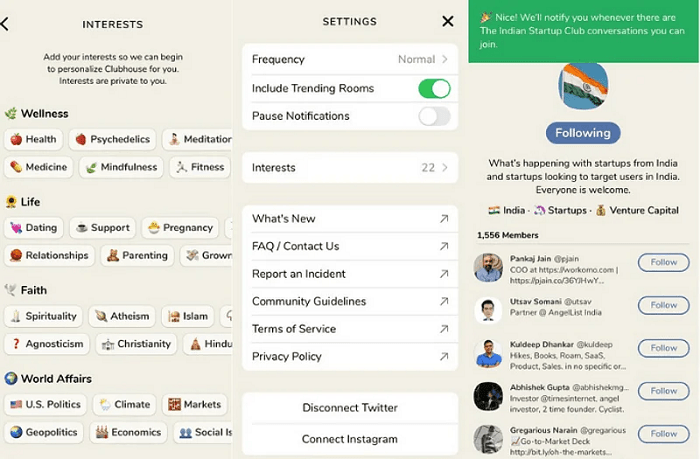