As a teenager growing up in America in the late 1990s/early 2000s, I was a frequent customer of Blockbuster – the largest movie rental retail chain with a strong brand and stores across the country. Its revenues impressively climbed to around $6 billion dollars in 2004 only to suffer a crashing descent into bankruptcy in 2010.[1] The reasons behind this failure reveal valuable lessons to future digital transformers and business leaders. I will first summarize the original business model in terms of value creation and value capture and then will offer an analysis of its failure with accompanying lessons.

Blockbuster movie rental retail stores offered a wide selection of movies, but focused mainly on new releases. It’s 9,000 stores allowed customers to easily walk through aisles of movies advertised with their DVD cases in order to make a selection.[2] It built a strong brand with 100% recognition and attempted to offer a customer-friendly experience with movie popcorn, candy, and snacks also available for purchase.[3] 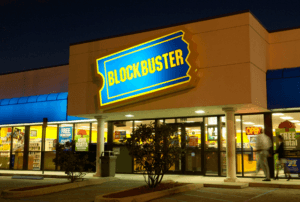 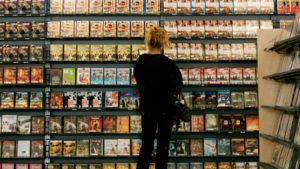 Blockbuster captured value by owning physical copies of movies that could be rented enough times to exceed the cost of purchasing. It cost from $2-$5 typically to rent a film, new releases commanding higher prices than old films. Each time a customer rented a movie, they agreed to a time and day for return. Late fees, which comprised an estimated 70% of profits, were added to a customer’s account if they did not meet the return deadline.[3]

After synthesizing analyses on its unraveling, I think these things most contributed to the failure:

In this industry, changes occur rapidly, and Blockbuster was left in the dust.

Blockbuster’s demise offers many lessons. Here are some of the salient ones to me:

JD.com: A Winner as E-Commerce Grows in China

Atlassian: Quietly Rebuilding the Enterprise from the Bottom Up