In the late-2000s, Research in Motion’s (RIM) BlackBerry smartphone was seemingly everywhere and looked like it was here to stay.  In 2009, Fortune named RIM the World’s Fastest Growing Company with earnings growing at 84% YOY.[i]  Time stated, “The device was so ubiquitous on Wall Street and Capitol Hill that it earned the nickname CrackBerry.”[ii]  The BlackBerry was the first device to “push email” – allowing users to received emails when they were sent rather than having to check email constantly.  BlackBerry’s computer-like QWERTY keyboard was the first on a hand-held device and allowed for much faster typing than the old numeric keyboard which all other mobile phones had.  BlackBerry also had enormous Network Effects, as millennials loved the chat function BlackBerry Messenger (BBM) and one could only BBM with other BlackBerry devices.  At 21% worldwide phone market-share in 2009, BlackBerry really was the first successful smartphone.  However, by the end of 2013, BlackBerry’s market share had fallen off a cliff to under 1%. What happened? How did this incumbent and winner become a loser? How was this fall from grace so expedited? 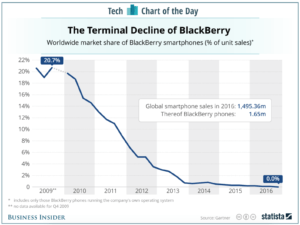 On the flipside, as BlackBerry crumbled, Google Android and Apple iPhone came to dominate the smartphone market.  By the end of 2016, Android held a 85% market share while iPhone held a 14% market share.[iii]  In September 2016, Blackberry announced it was exiting the hardware business to focus on software.  At that time, Blackberry had officially fallen to 0.0% of the smartphone market, with just under 208,000 devices running BlackBerry OS sold.[iv]

I believe two main factors contributed to BlackBerry’s demise.  First, BlackBerry incorrectly believed that the corporate world rather than the consumer world would drive smartphone adoption.  BlackBerry focused on attributes such as security and keyboard ease of use to come to dominate the corporate market.  Focusing on its corporate users, BlackBerry insisted on creating phones with full keyboards, despite seeing the feedback from the majority of users that they preferred touchscreens.  BlackBerry saw its devices as email-enabled mobile phones, rather than the powerful mobile computers which Google and Apple envisioned.  While BlackBerry was focusing on the keyboard, Google and Apple were focusing on entertainment attributes such as better cameras, speakers, and video viewing.

When BlackBerry tried to launch a consumer-focused device with a touchscreen rather than a keyboard in 2015, the device did not stack up well against the sophistication of the Android and the iPhone, which were then both several generations in.  Thus, focusing on corporate rather than consumer and not adapting once it became obvious that was the wrong decision paved the road to BlackBerry’s demise and ultimately towards being a loser.

TurboTax by Intuit: Taxes don’t have be Taxing