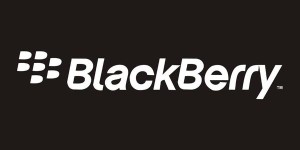 BlackBerry was founded in 1984 in Canada, and within 20 years its products were cultural icons. The company gained prominence by targeting professional consumers with a focus on e-mail and security. By 2006, BlackBerry’s stock price had surged, and it reached 5 million subscribers. The term “crackberry” even developed to described addicted users. In 2008, BlackBerry stock hit an historical high, and had 19.5% market share in the global smart phone market. The United States even elected a self-described “crackberry” addict to the White House.

However, BlackBerry soon fell from grace and is easily characterized as a “digital loser”. What went wrong?

Apple launched the first iPhone in 2008. The iPhone represented a different—and more innovative—approach than previous smart phones like the BlackBerry. It focused on design, performance, and ease of use to appeal broadly to all consumers. Steve Jobs in a short keynote address could easily demonstrate how to use the iPhone; BlackBerries took weeks to master. Moreover, the iPhone design was artistic, sleek and modern, and became a selling point unto itself; the BlackBerry looked clunky, corporate, and dated.

Despite the threat from Apple, BlackBerry refused to change course. Management remained steadfast in its focus on security and efficiency, and sought to continue to target its core base of corporate and government clients. It stuck to what had worked in the past, but failed to see the future. BlackBerry’s misreading and stubbornness is best exemplified by the former co-CEO exclaiming in 2008 that  “the most exciting mobile trend is full Qwerty keyboards. I’m sorry, it really is. I’m not making this up.”

BlackBerry’s  features fell behind the iPhone, Android, and others

Unlike previous smart phones, the iPhone had a fully Internet-capable browser. This initially strained wireless networks, but consumers loved it. A fully Internet-capable browser is now a standard smart phone feature. Not only did BlackBerry fail to add this feature within two years of the iPhone debut, but BlackBerries still lack comparable Internet browsers. Loading a standard webpage on a new BlackBerry takes minutes—in 2015.

Additionally, competitors like the iPhone and Android made using a smart phone fun. On these devices the consumer could go to an app store and buy games, music, movies, magazines, and more. This consumerization of business technology meant that the smart phone was no longer exclusively for business. BlackBerry ignored this trend, and lost considerable market share as a result. 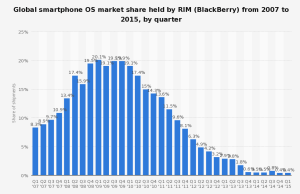 BlackBerry’s eventual response was too little, too late

The iPhone and Android surpassed BlackBerry in global market share in 2010. From that point on, global market has steadily decreased, as has the stock price.

BlackBerry’s eventual response to the evolving smart phone market was the BlackBerry 10, which it released in January 2013. Even though influential tech critics praised the device, the sales were disappointing. In the almost six year in between the iPhone launch and the BlackBerry 10 launch, consumers developed loyalty towards Apple, Samsung, and others, and came to see BlackBerry as a thing of the past. BlackBerry stood idle and squandered its once-strong market share. The BlackBerry 10 need to be a game-changer, but it was not sufficiently innovative or different from other smart phones to cause consumers to once again change their loyalty. Even BlackBerry’s small (but cult-like) customer base rejected the new device because it lacked the traditional Qwerty keyboard.

BlackBerry recently released the Passport and Classic in hopes of bringing back once loyal consumers. However, sales have been staggeringly low. BlackBerry will have to innovate and revive itself quickly in order to shed itself of the “digital loser” label.

Student comments on BlackBerry: Why Even the “CrackBerry” Addicts Quit