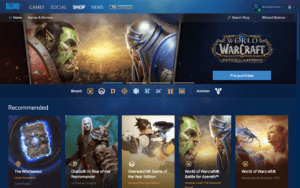 The nature of the video game has changed dramatically over the last 30-40 years. Arcades were one of the first forms of interactive video content. At the time users had to travel to a location that serviced arcade machines and play each game on a different piece of hardwar. Eventually that evolved into a system where a single piece of hardware could be kept in the home and would allow users to buy physical copies of games and play a range of games on a single piece of equipment. Throughout that evolution though, the only way for users to play with friends was to be physically located at the same location they wanted to play with. Through the early 21st century however, the internet has unlocked increased potential for both video game developers and consumers. Gamers are now able to purchase and download games from digital marketplaces and to leverage the internet to play with friends and strangers around the world. It is this capability that has allowed Activision Blizzard to launch Battle.net.

Battle.net, or Battlenet as it is often called, is Activision Blizzard’s (NASDAQ: ATVI) online gaming platform. The platform is home to majority of Blizzard’s games (Blizzard is a division of Activision Blizzard that primarily produces PC games) and, as the company has seen the value of same and cross sided network effects, many of Activision console based games as well. The platform allows users to purchase games, play them on the platform, read about the latest gaming news and even interact with other gamer friends. The benefit for users is that is a central hub for everything Blizzard and they can seamlessly move from one game to another or pivot from reading a relevant article to sharing it with a friend. The value to Activision Blizzard is that is that they are able to collect data on gamer trends, which allows them to improve the gamer experience, and they are able to cross sell games to consumers, which is useful because many of ATVI’s games contain IP from other titles, which is a trait that often increases engagement with users.

Going forward, the company will need to find ways to expand its platform and new ways to capture the value it creates. The first and most obvious expansion step is in offering more of the company’s games on the platform. At the moment, most of Activision’s console based games are not on Blizznet, including Call of Duty, which has been the most popular console game for 8 of the last 9 years. Given the tens of millions of gamers that engage with the franchise, it is a ripe opportunity to help the platform scale. Another way the company can expand the platform and capture the value it creates is to bring advertisers onboard. Although it has the potential to erode some of the consumer experience, if you can seamlessly integrate the advertisements and use some of that ad revenue to add new, free features for the consumer the ads have the ability to both grow the top line and increase user engagement. Lastly, as ATVI expands its consumer products offering, it should sell those goods on Battle.net even if the platform is not the exclusive home. It is unlikely the company will ever rival Amazon in e-commerce but it will be useful for the platform to develop diversified revenue streams. Given the company’s hundreds of millions of monthly active users and engagement numbers that rival those of Facebook, Activision has the ability to become a meaningful player in the age of online platforms.

ofo: is bike-sharing really part of the sharing economy?