Mondelez has become the latest CPG company to engage crowdsourcing tactics to promote its brand. In 2017, Mondelez launched the #MyOreoCreation contest, asking consumers to send in flavor suggestions through social media. After reviewing thousands of submissions, the Company chose three finalists and awarded them $25,000. The winning flavor will win $500,000 and the opportunity to visit the “Oreo Wonder Vault” where the cookies are made.

To engage consumers further, the Company sent prototypes of interesting flavors to submitters. Not surprisingly, these social media users quickly posted photos of these cookies. In fact, prototypes such as Avocado Oreos caught the attention of numerous media outlets from Teen Vogue to Buzzfeed. These earned media opportunities not only helped promote the contest, but also allowed young consumers to interact with the Oreo brand. According Zambezi Co-Founder and Managing Director Chris Raih, “people are harder and harder to reach, and we live in an attention-based economy where attention is the most valuable commodity there is.  If the end goal is to get people to engage people with the brand, then crowdsourcing is the way to do it.”[1] Crowdsourcing gives Oreo consumers a way to interact on their own terms and pulls their communities in to react as well. 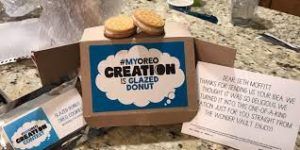 In addition to brand awareness, Oreo is creating a more efficient R&D process. Late last year, Mondelez announced the three finalist flavors: Pina Colada, Cherry Cola, and Kettle Corn. Unlike the Avocado Oreos, these three products will launch in stores in May 2018 and the public will vote for their favorite flavor. By directly engaging consumers to purchase their new product and provide feedback, the Company can tangibly track taste preferences. Darren Seifer, an analyst at NPD Group states, “instead of going and spending lots of money on focus groups and taste testing, they’re almost using the power of social media to help them out figure out what’s the next road and what’s the next big thing.”[2] 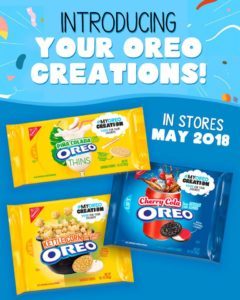 Although the campaign has helped boost Oreo’s brand (which now has 43 million followers on Facebook), there are some potential setbacks to engaging a crowdsourcing model. By soliciting feedback from the masses, companies give up some control over the brand image. Engaging social media can lead to association with content that may not be aligned with the brand’s values. For instance, the Villa Fresh Italian restaurant launched the “Dub the Dew” campaign in 2012 to “help” Mountain Dew name its new flavor. Many users submitted offensive and inappropriate ideas which received enough support to top the rankings. Even though Mountain Dew and PepsiCo were not involved in this campaign, the Company was still forced to release a statement: “Dub the Dew,” a local market promotional campaign that was created by one of our customers – not Mountain Dew – was compromised. We are working diligently with our customer’s team to remove all offensive content that was posted and putting measures in place to ensure this doesn’t happen again.”[3] Companies must diligently monitor crowdsourcing campaigns that they design as well as those that use their name to ensure that they lead to positive outcomes and brand accretion.

The #MyOreoCreation appears to be a success for Mondelez in terms of earned media and social media exposure. However, the profitability and runway of these new Oreo products has yet to be seen. Over the years, the Company has released dozens of new Oreo flavors in hopes of getting consumers to purchase more product. “Oreo clearly understands the days of selling the same old product to everybody are over. If they had a new Vanilla Cream flavor, we wouldn’t be talking about it” states Professor John Stanton.[4] The question remains: overtime, will these new flavor introductions and crowdsourcing campaigns become pedestrian to consumers or keep everybody talking?

Student comments on Avocado Oreos? – Crowdsourcing in the CPG World