Robotics and automation are here to take our jobs.Back in 2014, an internet documentary called “Humans Need Not Apply” predicted a future workforce almost entirely run by automated robots. It took the world by storm. Since then, the press keeps on talking about it, McKinsey wrote a huge report on it, and venture capitalists all over the world are furiously investing in that thesis.

The general consensus of these technologists, analysts, and thinkers is that vocational jobs, such as factory workers, are going to be the first ones to go. Vocational schools are expensive and slow to keep up with the latest technology training, making it expensive for companies to train works, thus enticing them to invest in robotic automation. However ScopeAR, an augmented reality company, sees it a little differently. AR can be a easy, low cost way to dynamically train workers on the job! Its appealing enough that companies might invest in that rather than attempting to fully automate their workforce. 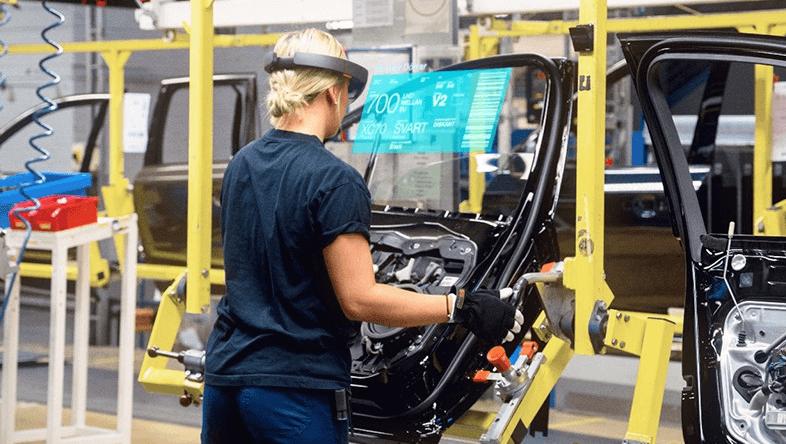 In this rendering of a ScopeAR use case, a car plant factory worker receives instructions through an augmented reality HoloLens.

How does ScopeAR create value?

ScopeAR provides augmented reality solutions to the maintenance workforce of companies like Lockheed Martin. They are essentially making augmented reality versions of maintenance documentation and deploying it to workers “just-in-time” through the field of view in an augmented reality headset! For example, if a worker needs to change the fluid oil in a car engine, he or she may see a visual of how to do that and what tools to use digitally overlaid on the engine itself. Check out the following video where ScopeAR demonstrates their product.

In the future, this kind of technology can also be used to cross-train workers, or help them complete more complex tasks with added precision and speed.

How does ScopeAR capture value?

Today ScopeAR is working directly with major companies include Lockheed Martin, Toyota, and P&G. These companies pay on an annual contract basis for the hardware and software technology, in addition to consulting and implementation fees. ScopeAR is still a relatively small company. It was founded in 2010 and has only take on $2 million in funding. Therefore it is still experimenting with value capture and business models. In the future it could do some kind of value based pricing where it takes a portion of the expenses saved from additional time and accuracy afforded by the headset. It could also possibly charge based on the next-best-alternative, which is simply company training time via workshops, managers etc.

How can it grow the business in the future?

The potential to supplement training has huge economic value. However, even this newer, state of the art technology has the potential to be outdated if full robotic automation arrives more quickly than is anticipated. Therefore ScopeAR must also directly get involved in the business of helping companies transition, first to augmented reality platforms, and then to full robotic automation. For the latter, they can leverage the business relationships they already have in the augmented reality platform. For example, Amazon first leveraged their marketplace vendors to identify new products and then began selling those themselves. Similarly, ScopeAR has the ability to see all the human factory tasks in the world that have the potential to be automated through its customers. It can pick the best ones and build technologies in house to fully automate those. By positioning their AR product as a “transitional” one in between fully manual and fully automated, they really have expertise to understand this transition.

So what does this mean for those workers?

ScopeAR, by no means, stops the potential of automation. However, it does propose a new means of teaching and training. This model, which is far more immersive, dynamic, and relevant than traditional worker training programs, does make workers more effective and well trained to do a variety of tasks. Hopefully ScopeAR is a stepping stone to new and better opportunities for current workers, pushing them to do more complex and skills based work.

Penrose Studios: The Pixar of VR?

Student comments on Augmented Reality Is Here To Save Your Job!