The problem: Why simulation for Autonomous Vehicle (AV)?

Driver data, or the data collected from videos recorded onboard an autonomous car, is critical in the race to develop self-driving technology. The more data that self-driving software has to work with, the more driving scenarios it can learn to handle, and the safer the autonomous vehicle will be on the road.

Testing AVs on real roads can be dangerous and costly; simulation is both safer and most cost effective, making the AV development process more efficient. That’s why based on Research and Markets estimation, the global automotive simulation market is projected to grow at a CAGR of 11.1% during the forecast period, from $1.4Bn 2018 to $2.9Bn by 2025 [1].

Simulation is helpful with training autonomous vehicles for dangerous, less frequent situations, such as blinding sun or a pedestrian jumping out from behind parked cars.

It is also more cost effective and efficient. According to the Rand Corporation, self-driving cars realistically need at least several hundred million, or even billions, of miles to validate their safety [2]. Amassing this data is both time-consuming and costly. This would take years to collect solely on public roads and would hold back AV development substantially. 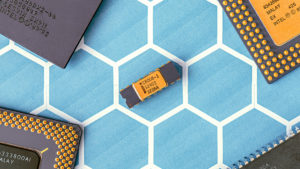 Intel Inside or on the Outside? Exploring the impact of artificial intelligence on the supply and design of processor chips

Additionally, AV developers are increasingly relying on simulation technology to shorten their iteration cycle and breakdown and pinpoint issues. If the car fails on the road, it would be very tough to pinpoint what actually caused the failure, but in the simulation environment, developers could test different models, different parts of the stack, such as planning, perception etc. to break it down and understand the root cause.

Founded in 2017, Applied Intuition provided advanced simulation infrastructure software designed for autonomous vehicles. The company’s current suite of products focused on simulation and delivers sophisticated infrastructure, equipping engineering and research teams with software that made it faster, safer, and easier to bring autonomy to market.

Co-founders Qasar Younis and Peter Ludwig were “Made in Detroit” before they came to Silicon Valley, working at companies like General Motors and Bosch before Google Maps and Android Auto. While they recruited their team from Detroit suppliers like Bosch and Aptiv PLC, they also pulled heavily from their alma mater, nabbing staff from Google’s robotics team and Waymo. The team was a “best of both” combination of software acumen and ethos, with senior engineers specializing in simulation, robotics, and autonomy, coupled with a deep understanding, respect, and passion for how the automotive industry works.

Applied Intuition’s simulation software creates value by allowing car companies to simulate billions of miles driven, in a massive number of driving scenarios in any weather, road system, and with an extraordinary range of conceivable unexpected variables and circumstances. The self-driving simulator works like a video game: There is an elaborate 3D world, programmed with millions of different theoretical outcomes, run by tremendous computing horsepower. It can run at massive scale and enable new machine learning techniques to be used and analyzed for safer autonomous systems. In the future, such simulations will be core to the toolchain and development process of any company designing cars. And simulation for self-driving cars is just the beginning.

When it comes to which part of the AV value chain can be more profitable, it depends on what point in time you are looking at the development of autonomy.

Most people in the industry believe that “whoever provides the autonomy system is going to be the leader and absorb most of the value”. However, getting to that Level 4 fully autonomy state might take another 3-5 years, and in the meanwhile, all the players like Zoox, Cruise are burning tens of millions of dollars a month, hardly profitable. They are not going to have a business for many years.

If you think about the value chain as data coming through, there are people who are servicing the data and people who are using the data. People who are servicing and manipulating the data – infrastructure layer like the compute, the simulation, the maps – will be more profitable; And those who are using the data – vertically integrated OEM – will be less profitable. Where horizontal suppliers (data labeling, simulation, sensors) are positioned is incredibly valuable because those will continue to be needed as AV companies scale with more volume. Right now the most value is concentrated in the suppliers to the vertical system integrators, such as Applied Intuition.

If we believe the AV industry is going to look like traditional automotive industry, automakers at the top would be squeezed on margin, because consumers generally are interchangeable (global automakers make  ~$280B in revenue [4] in a year despite low margin at ~5% [5]), and companies that produce auto parts are more profitable, with higher margin ~30% at lower top-line revenue ~ $280M [6].

[2] Source: How Many Miles of Driving Would It Take to Demonstrate Autonomous Vehicle Reliability?, via Rand Corporation

Please Buy Our Paper, Anyone But Wall Streeters