Founded in 1995, Angie’s List crowd-sources reviews of local home-related services, so members can find the help they are looking for while also being confident in their selection in terms of service quality and price. The company also serves as a means of advertising and sourcing new sales for businesses looking to reach a broader audience at a reasonable price.

There are nearly 5 million members on Angie’s List, many of whom are attracted to the site since it offers a comprehensive list of local service providers that span over 720 different categories. With over 10 million reviews, Angie’s List provides robust data to potential customers (and service providers), which helps members save time and have greater peace of mind when booking a service. Having access to a Complaint Resolution team and the opportunity to publically rate and review a service provider also gives members greater confidence in their hiring/purchasing decisions. This process promotes a virtuous cycle, and the platform also offers exclusive deals, helping members simultaneously save money.

Angie’s List works rigorously to verify reviews, protecting against companies reviewing themselves and/or competitors as well as other fraudulent behavior. Additionally, the “crowd’s” comments are “managed” since reviews aren’t anonymous and the overall rating and review process is subject to annual audits. 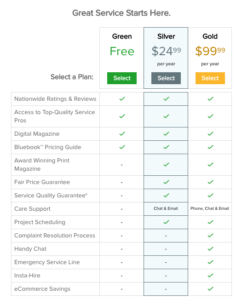 Angie’s List captures value in a few manners. For the Member side of the platform, Angie’s List currently utilizes a freemium model, which features three different membership tiers: Green, Silver, and Gold. Silver members are charged $24.99 and Gold members are charged $99.99 annually. [See chart for breakdown of benefits] As for service providers, Angie’s List generates revenue from them via advertising and promotional fees, as well as other e-commerce offerings on the site.

Although the platform has grown significantly, the company has struggled with being a profitable endeavor for over 15 years. The company was profitable in 2015; however, it ended 2016 with a net loss of $7.9MM—although for Q4’16, net income amounted to $8.9MM. According to press releases, the company hopes to return to profitability and continue growth by focusing on driving stronger member engagement and delivering move value for service providers.

It’s challenging, however, to see significant growth potential in Angie’s List. The competitive landscape is dense with companies like HomeAdvisor and TaskRabbit in the market, to name a few. Moreover, when Angie’s List made the move to a freemium model, the company aimed to increase membership numbers significantly. Although membership has continued to grow, it has done so at a decelerating clip. Additionally, some paying members have moved to non-paying memberships, which has eroded revenue figures. With increasing membership figures, it’s reasonable to anticipate more on-platform purchases from service providers and for the number of service providers on Angie’s List to grow (due to indirect network effects). However, this phenomenon hasn’t been truly witnessed yet. Perhaps the platform is loosing its stickiness and/or the experience isn’t enough of a closed loop process. Transactions may be taking place outside of the platform and, accordingly, Angie’s List must devise a way to combat this, especially for business that specialize in reoccurring services (vs. single use/time purchases). Nonetheless, it’s not surprising to hear that Angie’s List is rumored to be seeking an acquirer despite its efforts to turnaround. [1]

Student comments on Angie’s List: The Original in Crowd-Sourced Reviews