We are used to describing Amazon as the ultimate winner in the digital age, to the point where writing an article about them winning (yet again!) seems obvious and unoriginal. But Amazon’s powers extend far beyond 21st century digital businesses such as e-commerce and cloud services. The company is investing billions of dollars in brick-and-mortar, while competitors try to diversify away from the old model by going on an e-commerce shopping spree [1]. 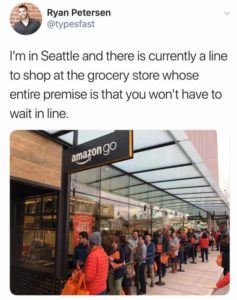 This past week, Amazon opened its first Amazon Go store to the public. As I experienced firsthand during the beta test, the concept is simple: Amazon wants to reduce friction for the customer by enabling a grab-and-go system without checkout lines. This model is enabled by massive investments in computer vision and machine learning software [2]. But, why would Amazon invest millions to disrupt the convenience store industry, which has almost negligible margins [3]? One obvious reason is that the labor-saving technology will enable margins to be healthier while attracting more customers due to the time-saving experience. The other, not so obvious reason is that they are uniquely positioned to scale and make these stores ubiquitous in the countries they serve.

Last June Amazon spent a whopping $13.7bn on acquiring high-end grocery chain Whole Foods [4]. The news of the acquisition (at an approx. 30% premium) sent stocks of other grocery chains tumbling down (see chart 1 below). However, the number of stores acquired may not justify, at least at first sight and in the short term, such a significant investment in the “cashierless” technology.

Since Amazon has already incurred these R&D costs, the most logical way to spread these fixed costs is to achieve a bigger scale, i.e. license this technology to any grocery or convenience store chains, which would in turn benefit from saving in labor costs. It is safe to assume that 7-11 would very willingly pay a reasonable fee to avoid manning their stores 24/7, and that they do not have the software capabilities to develop a similar solution in-house.

However, Amazon’s past behavior suggests that they may choose to keep the Go technology in-house. In 2012, Amazon acquired Kiva Systems, a robot manufacturer used in their fulfillment centers [5]. With a price tag of $775m, most observers thought that the purchase would only make financial sense if the existing customer base was maintained. But Amazon renamed Kiva as Amazon Robotics and refocused all production to satisfy its shipping network [6].

Although these kinds of investing decisions might be financially painful in the short term, Amazon’s apparent disregard for quarterly earnings pressure remains supported by its long term financial outlook. Decisions at Amazon are made based on a longer horizon, which helps to explain both the rationale of acquiring Kiva and scaling fulfillment centers to meet its production rather than keep supplying other retailers and distributors and, probably, the rationale of not licensing the Go technology and keeping it in-house. From a strategic perspective, by keeping industry-disruptive technologies in-house, Amazon is building moats to defend itself from potential competitors [7] and avoiding leveling the playing field. This approach is poised to pay off for the Seattle giant in the longer term, and other retailers will be forced to keep up with technological investments or will face going out of business.

There is only one caveat to this strategy, and that’s regulatory scrutiny. Amazon’s business model appears to be disrupting different industries’ business models. So far the company has encountered no significant resistance from antitrust authorities, and that might well be due to its very positive brand image and its customer-obsessed strategy [8]. However, Washington’s views regarding the tech industry have changed considerably in the past year, and with Jeff Bezos as the owner of The Washington Post, plus the potential of Amazon Go making hundreds of thousands of jobs redundant, enhanced regulatory scrutiny seems now closer than ever. If regulators believe that the Go stores, combined with the Whole Foods acquisition, are potential grounds for an antitrust case, the company might need to consider the licensing route as the only viable alternative for its ground-breaking technology. 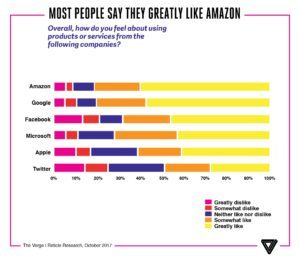 Student comments on Amazon | To Go Or Not To Go