I’m often surprised at how many individuals are Amazon Prime members but are not aware that included in their membership is access to Amazon’s digital music streaming service, Prime Music. With over a million songs and a user-friendly interface, Prime Music offers many features that other music streaming services such as Spotify and Pandora offer. Users can download songs for offline usage and create their own playlists, for instance. In addition, unlike other music streaming services, through a feature called “X-Ray Lyrics”, users can scroll through the lyrics of an entire song and quickly access their favorite parts by tapping on the lyrics that they want to play.

Along with the above features, Prime Music creates value to users by providing them with uninterrupted listening (no ads) and unlimited skips, two benefits that are not offered on Spotify and Pandora’s free-tiered platform.

Perhaps more interesting than Prime Music’s value creation model, however, is its value capture model, which could explain the product’s low-awareness among Prime members. Since Prime Music does not generate revenue from advertisers, it is attributed a portion of the $99 annual Prime membership fee (this portion varies each year and is evaluated based on a number of criteria and a complex algorithm). The amount that is attributed is weighted against other benefits that Prime members gain from their membership such as free shipping and Amazon Video. As one can imagine, because many users do not know about Prime Music, the service is not considered to provide much benefit to Amazon (relative to other Prime benefits), and thus the amount of revenue Prime Music is attributed per user is quite low. Still, Amazon Music helps acquire, engage, and retain Prime members, at least enough to justify that Amazon keep the cash draining service around.

And so, since Prime Music doesn’t actually capture a lot of value from listeners, it inherently lacks the financial resources to provide the full-suite of over 30 million songs that other music streaming services are able to offer (again, Prime Music offers ONLY just over a million songs). This is exacerbated by Prime Music’s business model, which requires that Amazon pay higher licensing fees than Spotify because it does not operate under a traditional subscription-based model. Due to a poor value capture model and high costs, is no wonder Amazon does not have much incentive to tout Prime Music to its members.

At least not until recently.

In launching Amazon Music Unlimited, Amazon Music’s focus has mostly been on changing its value capture model so that its value creation model is comparable to other music streaming services. Specifically, the new value capture model generates more revenue from an audience that is no longer limited to Prime members and also reduces costs. Amazon Music Unlimited offers three pricing packages, one for Echo or Dot users ($3.99 / month for each device), another for Prime members ($7.99 / month), and another for non-Prime members ($9.99 / month).

More subtle, but just as significant, is that by charging users a monthly fee, Amazon Music Unlimited is considered a traditional subscription-based business (like Spotify) and can command lower licensing fees from the record labels such as Universal, Sony, and Warner.

Herein lies the problem. Amazon Music Unlimited, while offering a significantly larger music catalog than Prime Music, does not create significantly more value to users than leading competitor Spotify, which dominates 43% of the market (see chart below). 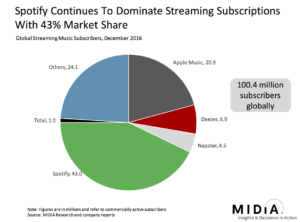 Furthermore, Spotify creates value across an array of audiences outside of music listeners. For instance, it provides advertising opportunities to businesses and adds value to companies through partnerships such as with Uber and American Airlines. Spotify also has an API and actively seeks out ways to create value for developers.

Although, there are hints that Amazon Music has a strategy to create more value for users in the future. Amazon Music Unlimited was launched after the success of its personal assistant devices, the Amazon Echo, Dot, and Tap. Individuals with an Amazon Echo can easily say, “play [x] song,” and the song will automatically play from either Prime Music or Amazon Music Unlimited. Playing songs from Spotify or Pandora require Echo users the additional step of requesting Alexa to open the music streaming app, making it more difficult to multi-home.

Unfortunately, while Amazon Music Unlimited is still relatively new, so far, the data does not suggest that the Amazon Echo has created significantly more value to users. In fact, in a recent survey conducted across 5200 participants, 42% of Echo users streaming music mentioned streamlining music through Pandora at least once over the past 12 months (see chart below). 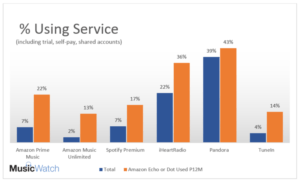 Amazon Music Unlimited is certainly a huge play to capture value and lower cost, but it’s not clear whether Amazon is distracted or blind-sighted from creating value for users and other audiences. Certainly, the winner of the music streaming wars will be the company that can not only capture value but also create value by offering an ecosystem of platforms for music listeners and businesses.

LiquidSpace and the Platformization of Office Rentals