Amazon in the Clouds

Amazon Web Services, the fast-growing public cloud development platform, has helped make Amazon the darling of Wall Street.  AWS has dominated the Infrastructure-as-a-Service (IaaS) space with an estimated 31% market share [1], and become one of Amazon’s few endeavors that generates a substantial profit margin. 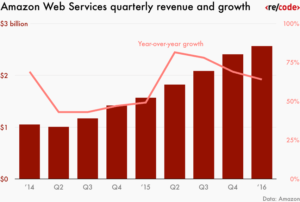 Amazon has been notoriously tight-lipped about this highly competitive space, but recently began breaking out its financials for AWS and revealing that this once niche segment has grown into a $5 billion business[2], and reported 64% year-over-year growth[3].

AWS is winning in the digital economy by delivering to developers new and innovative web services at a blistering speed, and stealing business and market share from entrenched competitors who cannot keep up. AWS invented a series of entirely new markets, and is desperately being chased by competitors like Google Cloud Platform and Microsoft Azure.

Amazon is building entirely new markets and products and releasing them quickly for developers to take advantage of. Amazon Lex, which allows developers to leverage the same natural language processing technology that powers Amazon’s digital assistant Alexa [4], has put cutting edge machine learning tools in the hands of third party developers. Furthermore, Amazon can capture considerable value from offering this service not just because it can charge developers for using the service, but also because Amazon can use the data generated by these third party applications to continue to improve its language processing abilities through data-hungry machine learning techniques.

drive down the cost of computing and makes scaling applications easier [5].  Businesses can save money by never needing to pay for idle servers. This new market, known as Function-as-a-Service (FaaS) has quickly garnered attention and praise for it’s design, and spawned numerous copycat services.

AWS hasn’t only pioneered new markets, but has disrupted countless others as it continues to dominate the cloud computing environment. AWS changed the IT cost model from one that required high up-front investments in data centers and hardware, which was time consuming, costly and difficult for businesses to manage and scale, into a model where businesses can set up quickly and pay only for the amount of computing services they actually use. Amazon has developed efficiencies so great that few businesses could build their own data centers at a better price-performance basis.[6]

other market Amazon has entered into is the commercial high-performance database solutions market, traditionally dominated by Oracle. With their new product Aurora, Amazon offers customers the same performance as Oracle systems at 1/10th the cost [7], all while eliminating the frustration of database lock-in by making their systems compatible with open-source database technologies. Amazon has even begun going after stalwarts such as Microsoft Office by offering competing products in the work email and document editing markets.

AWS is winning in the modern economy by aggressively launching new services, not being afraid of attacking rivals, and even cannibalizing its own services with new products that offer better value to customers. Developers who become familiar with AWS’s platform are unlikely to spend the time and energy required to re-familiarize themselves with a competition platform, allowing AWS to build loyalty and momentum in the IT community, and consistently keeps pace with declines in the price of computing by offering reductions in pricing on a regular basis [8].  Amazon continues to leverage the network effects generated by the scale of its cloud computing model, and stands poised for further dominance in this market.

JD.com: A Winner as E-Commerce Grows in China

Atlassian: Quietly Rebuilding the Enterprise from the Bottom Up

Student comments on Amazon in the Clouds