Amazon is currently make a big push in the apparel space. One estimate of Amazon’s revenue say that apparel makes up approximately 10-20% of revenue, or between $18 and $26 billion, which is significant considering Wal-Mart and Macy’s sell $25 and $22 billion in apparel, respectively.[1] The company has made progress on two main fronts.

The first is Amazon’s bread-and-butter – the company is simply luring customers away from traditional retail outlets and bringing shoppers onto it’s platform. Recent reports have shown that while consumers are spending less money on apparel at stores like Macy’s or Target, they are increasing their apparel spend at Amazon.[2] These trends are even more striking given that most of the shift towards apparel purchases at Amazon are coming from non-Prime customers, though Prime customers have a much higher overall likelihood to purchase clothing on the platform. Amazon is even getting in on the subscription craze with Prime Wardrobe, which overcomes one of Amazon’s biggest hurdles in apparel – the inability to try items on.[3] Amazon’s growth in the apparel game has even led Nike, a long holdout, to start selling directly on Amazon, which could be problematic for sporting goods stores.[4]

The second is through the introduction of private label brands, a more recent Amazon strategy. Amazon’s current offerings tend to focus on essentials such as basic pants and shirt offerings for men and clothing described as ‘everyday beautiful’ for women. Here is where Amazon is able to leverage all of the data it has on customer shopping preferences. By recognizing what trends are in and what is out, Amazon can leverage its scale to offer fashionable products to customers at comparatively rock-bottom prices. One research firm has identified 29 private label apparel brands associated with Amazon, which range from basics such as underwear and sleepwear to jeans to athleisure and activewear.[5] 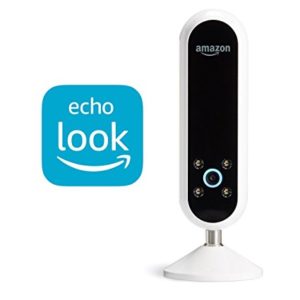 Introduced in May 2017, the Echo Look is a device that Amazon hopes will help it make deeper inroads into the apparel market, contributing to both strategies. The Echo Look is marketed as a “hands-free camera and style assistant with Alexa.”[6] As with most Amazon hardware products, this device aims to collect and leverage data to sell customers more and more relevant products. First, users will take photographs and videos of themselves wearing different outfits to keep in their ‘personal lookbook’. These photos will be analyzed by Amazon’s machine learning software (presumably supervised by ‘fashionistas’ at the beginning), which gives Amazon information on what people are currently wearing and the ability to distinguish between good and bad outfits. The Style Check feature will let users compare two outfits and the machine learning algorithm will suggest one over the other (see below photo).

Additionally (obviously?), this data will help Amazon sell clothing. Amazon will know not only the individual shopper’s preferences from the uploaded photos, but it can leverage the shopping data of its entire platform to determine what someone who tends to wear a certain type of clothing may want to wear in the upcoming season. Amazon can recommend products manufactured by third parties, or even work towards ensuring its private label brands stock the necessary products. There is not yet an apparel company that has the suggestive capabilities of Netflix or Spotify, and Amazon should be able to take a significant chunk of the apparel industry if it can pull this off.

Certainly there are challenges facing the Echo Look. There will undoubtedly be privacy concerns with a device in your closet capable of taking pictures and videos. Amazon has been transparent with what does and does not get uploaded on other Echo devices, and I hope the firm takes these concerns even more seriously with the Echo Look. The device is also quite expensive, which will surely turn off many consumers.

[5] Amazon Has More Private Label Brands Than You Think

Student comments on Alexa, what should I wear today?