In 2008 Airbnb’s founders were having difficulty raising funds for their new idea and were turned down by many Silicon Valley investors when trying to raise a mere $150,000.  No doubt part of investor skepticism revolved around the difficulty inherent in two-sided marketplaces and businesses that rely on indirect network effects for success. So what is the value of Airbnb’s indirect network effects and how did they scale the business? And now that Airbnb has reached a large scale, how has the traditional hotel industry responded?

The Airbnb business model is relatively simple: it allows homeowners to monetize unused space and provides trustworthy, unique, and often price-competitive housing alternatives to renters.  The business is a classic example of indirect network effects.  Value is created for homeowners when there is a large enough population of potential renters on Airbnb to give the homeowner access to a consistent flow of travelers visiting the local area. Similarly, value is created for renters only when there is a sufficient number of homeowners on the site to provide coverage of many different cities one might travel to and provide several options in that city.  When scale is reached on both sides of the platform, both homeowners and renters are able to capture value via a match between accommodation availability and the renter’s desired time/location/capacity.  The value of the network grows as more renters and more homeowners join the platform.

So how did Airbnb do it? Well, for several years the founders struggled, but eventually found a clever way to attract both property owners and renters.  The founders knew that Craigslist was a large competitor that attracted the same target demographic (someone looking for a non-traditional housing experience).  So, to tap into Craigslist’s scale, Airbnb discovered a way to essentially allow owners to “multi-home” their properties to list both on Airbnb and on Craigslist.  Not only did this lower the barrier for a property owner to list on Airbnb, but Airbnb also received a lot of attention from renters because the properties tended to be nicer and have higher quality images than a traditional Craigslist posting.  This strategy allowed Airbnb to reach a large number of renters – those who were searching for housing on Craigslist’s website – and a large number of property owners at once. Airbnb also leveraged Facebook’s social network to build its renter base.  They tapped into Facebook Connect, which, when enabled, allowed renters to see friends who had stayed at a homeowner’s home and were friends with a homeowner.  It also allowed renters to search for properties by more granular characteristics, such as undergraduate institution.  These measures helped to foster a sense of trust, assuaging concerns and making potential renters more likely to use Airbnb.

The two charts below provide an example of how both number of guests and number of listings have grown in similar patterns over the past 5 years, demonstrating the value of indirect network effects. In 5 years, the number of individuals staying in an Airbnb has grown from essentially zero to 15+ million people. Demonstrating a similar trend, Airbnb listings have grown from 50,000 to 550,000 from 2011-2014.  No doubt the growth in users spurred more renters to list properties, and the increase in property options drove more users to join Airbnb. 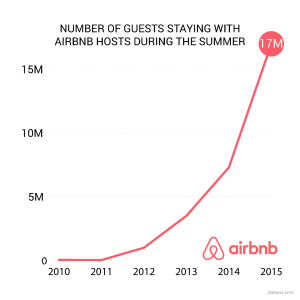 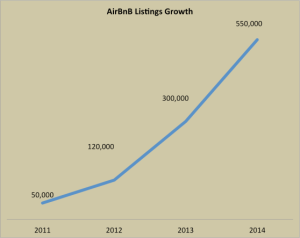 Airbnb is a clear disrupter in the hospitality industry, and hotels and legal professionals alike are taking a keen interest in the company’s operations.  For now, hotels have largely responded through legal channels, and regulators have differing opinions on how to treat and tax the company.  Airbnb currently is not subject to the same hospitality taxes and regulations that hotel are; however, Airbnb has surpassed many of these large hotel chains in size…cue the tension.  As the legal battles continue, hotels will be looking for ways to further differentiate their services from those of Airbnb.

UberPOOL: The New and Improved Tinder

Waze – Generating Better Maps through its Network of Users