First, users are invited to respond to questions asked by the app. The process is fully conversational, it takes 10 minutes per day during a week. Some questions are presented in the form of “date stories” in which a hypothetical couple situation is presented and in order to respond, users pick or rank the 4 options given by the app. The variety of topics includes sports, popular culture, housing preferences, leisure activities, dentistry, logic, mathematics, finance and reliability as can be read on AIMM’s website. 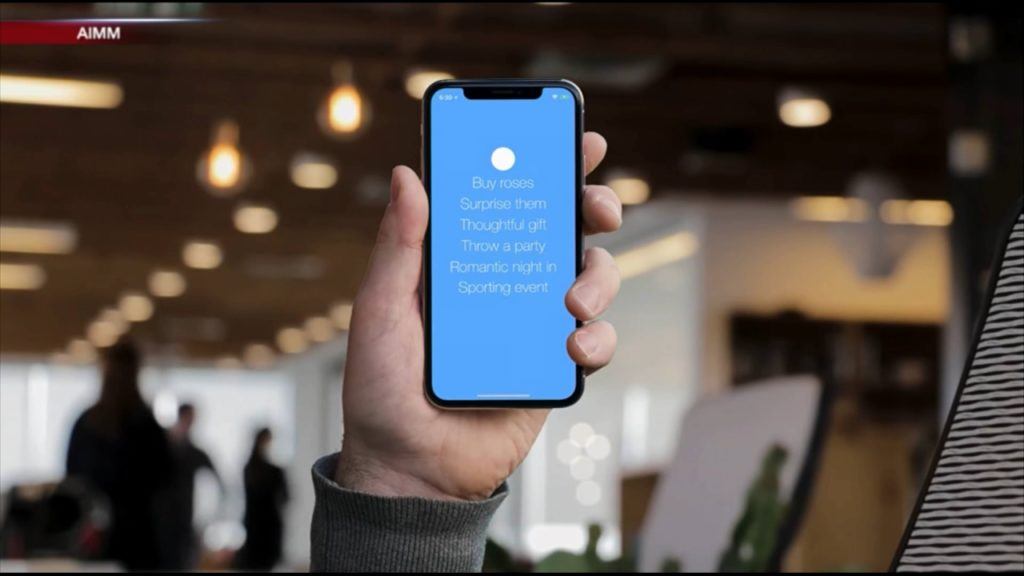 After a week, the app will find a match and show it to the two potential partner by displaying their pictures and sharing recording of their voices when answering to some questions. Each step of the virtual introduction requires user’s approval.  After validation, the app will provide video based coaching sessions by Kevin Teman, the founder of AIMM. Eventually, the app will help schedule a real introduction. After the first contact is made, it provides a follow up debrief session and if one of the pair “doesn’t feel any chemistry”, the app will cut ties in an automated process.

It is important to notice that the process varies depending on gender. According to the founder, Kevin Teman:

“Men are given two to four choices to pick from, while women are given one at a time. What’s more, women have been encouraged to stick with a match they have hesitations about. When I ask about challenges people have reported with the app, Teman says some women “wanted an out” so they could “reject the guy earlier” when they didn’t like AIMM’s pick. “AIMM was saying, like, ‘Hold on a second. Wait for a while so I can show you a few more things.’” He adds, “People need to have a little more patience with the process,” although he eventually altered the app to accommodate those women’s concerns.” (Ozy.com)

The app was created with the intention of being easy and entertaining. The voice is supposed to give the impression of a warm human interaction, it even makes jokes. In an interview given in July 2019, Teman stated:

“People love the “getting to know you” process. They think it’s clever. Many have said it’s like a giant RPG game because it paints hypothetical situations and leads you through different stories. It’s much more enjoyable than typing about yourself to “input data” like with most dating apps. That is my most memorable feedback; I’ve gotten it many times during phone calls with my customers, and it was in line with what I expected.”(voicesummit.ai)

Additionally, once combined with emotion AI technology, the speech and facial features analysis provide an additional layer of understanding of the responses provided. The founder believes that the process encourages honesty, to him, “it’s more awkward to lie when you’re having to state your answers out loud. Furthermore, it takes up to a week for AIMM to get to know you, so scammers don’t really bother with AIMM” (Ozy.com). All the data provided is private, “AIMM exists in its own world, never having to send your data to any third parties”(AIMM.online) and in order to cancel their monthly subscription and erase everything, users just have to delete the app from their mobile phone.

The app has been accused of being very gender stereotypical and of promoting monogamic heterosexual relationships since “there were no questions about Pride lifestyle” (Screenshot magazine). Additionally, Kevin Teman says “only men are pursuers” and in AIMM’s world “men are asked certain financial questions that women aren’t.” (Ozy.com)

In terms of it’s functionality, the app has been graded a 3.7/score on the App Store. Some comments describe the voice recognition as not performant enough or find the answering options too limiting. For example, nickname916 wrote on June 14th 2019:

“It never could understand when I said “2” or “6” and every once in a while “3”, which become integral parts of the experience.”

“You are only given binary answering options, which don’t always apply.”

Finally, in August 2019, only 12 matches has been set in real life since the launch and none led to a successful outcome (Screenshot magazine).

Ozy.com Can an algorithm be trusted with a soul mate search?

Voicesummit.ai: Kevin Teman Ai Matchmaking and the future of love