Advertising group WPP has created, through acquisitions and internal R&D, the programmatic media and technology platform Xaxis.  At the core of Xaxis’ customer proposition is to optimize its clients’ spend on online advertising. It does so by combining proprietary data, data from the advertisers, and from third parties. It then leverages this data in order to drive its purchase decisions for online audiences, maximizing the effectiveness of every dollar its clients spends. Currently programmatic marketing represents roughly 40% of online advertising. Analysts expect this proportion to grow, with programmatic advertising outpacing the growth of digital advertising as a whole.

Xaxis is not the only company that offers this sort of services. It competes against many others in a landscape that is very fragmented and sees players of all sizes working towards capturing a portion of value as programmatic advertising is expected to be a $30bn market by 2017. Advisory firm Luma has become famous for putting together what is called ‘lumascapes’: graphic interfaces that try to capture all the players in the different stages of the online advertising value chain. 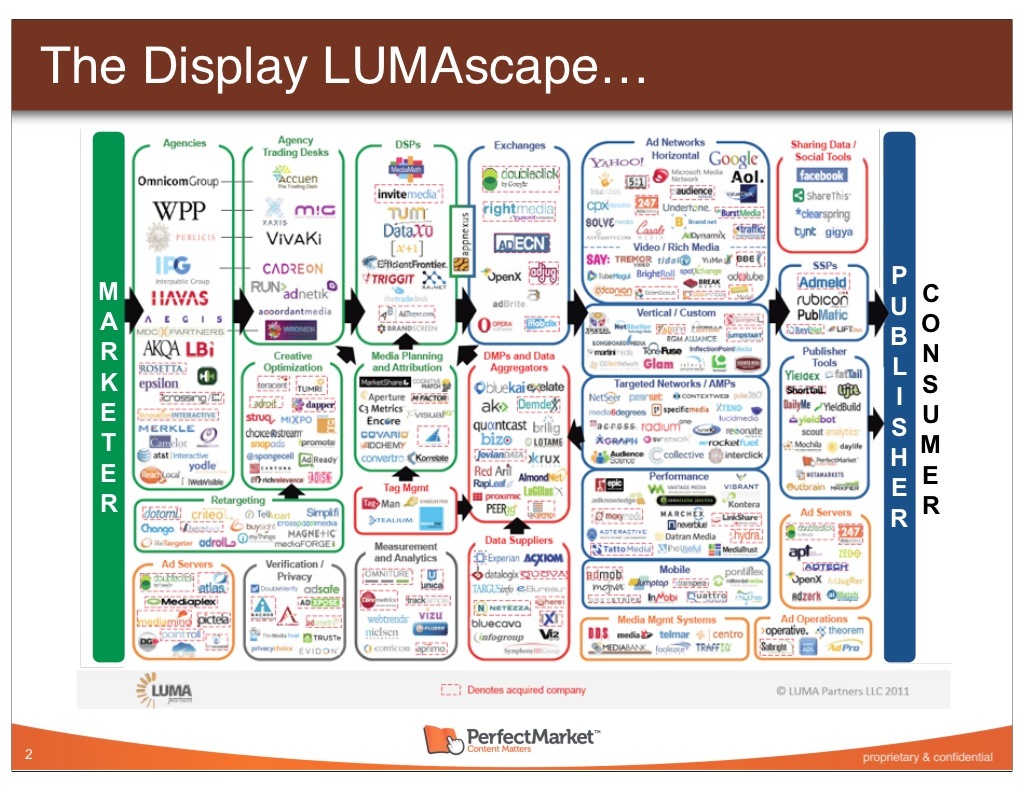 Many companies crowd every single angle of the proposition, from ad-exchanges, to DSP’s, to SSP’s, and to security applications and auditing services. A few of the companies in this chart are very big and many of the players here highlighted have a red box surrounding their logo, signaling that they have been acquired by other players on this chart. Programmatic advertising is attracting substantial investments, both by corporate players trying to stay relevant and acquiring the latest technologies and by venture capital investors hoping to back the next AppNexus.

How will this industry look in five years? Let’s go back to Xaxis. Xaxis finds itself in the middle between the advertisers and the publisher and has to balance those relations. In order to access premium publishers, Xaxis needs to have a strong relationship with premium advertisers, but also deep insights on how audiences are behaving. In order to deliver the most value to the advertisers that decide to use its platform, Xaxis need to have access to a wide array of publishers and ad exchanges, but also incredibly robust technology that allows the company to target the exact consumer the advertiser is after.

The direct network effect of the Xaxis platform are clear: the most publishers and the most advertisers will create the best value as people with matching propositions will most easily be matched by the algorithm to create the greatest value. With these sort of market forces, there isn’t room for the amount of players in the chart above to all play profitably.

Profitability in online advertising vary strongly among players, while margins are high compared to traditional media buying. This is driven by the fact that everybody is still very much trying to innovate and to keep on developing the most effective technologies for both sides of the equation. Few players though will be able to keep on competing as network effects will become stronger and stronger and advertisers will concentrate with the platform that has the best technology and has access to the best and most publishers.

WeWork: What can they do to make their platform even more valuable?