GoPro has revolutionized the way people capture and share some of their most memorable experiences with others. From skydiving and surfing to everyday hobbies, the rise of GoPro high definition video-recording devices have created tremendous amounts of digital content in nearly every part of the world, capturing some of the most exciting, surreal, and unforgettable experiences. The ecosystem of cameras, accessories and content editing software created 2.8 years worth of video on YouTube alone in 2013, the same year in which the company sold 3.8 million cameras1. The company is certainly a “winner” in the eyes of many: their cameras have brought people together to create and share digital content in ways like never before. However, GoPro faces an uncertain future. It has yet to be seen if GoPro can continue their success amid increased competition and market saturation.

A clear winner: Today, GoPro is a winner. According to the 2015 2nd Quarter Preliminary Earnings report, GoPro maintained strong revenue ($420M), gross margin (46%), and EPS ($0.35 diluted EPS) both year-over-year and sequentially2. Continued release of new cameras and accessories, strong corporate partnerships, and increasing distribution channels has resulted in great success for the young company since going public in June 2014 (valued $2.95B at IPO)3. However, despite beating 2nd quarter estimates, GoPro’s share price is down 40% in the past month, indicating potential worry about the future popularity of GoPro products and the risks associated with monetizing the vast digital content created.

Value creation: As previously mentioned, the GoPro line of products has created tremendous value for shareholders. For customers, GoPro creates value through its unique line of innovative products which lets users capture inspiring, high-quality digital content in ways like never before. GoPro’s investment in R&D has paid dividends in commercializing a high-definition video camera that is extremely light, small and significantly less complicated to use than traditional cameras. Customers buying a GoPro device get access to content editing software to make editing and sharing of pictures and videos seamless. Additional value is created through their ecosystem of GoPro-specific accessories: from underwater casings to straps to mount a device to your dog, the GoPro product line encourages customers to seek out new experience to use their camera to capture any memory.

Value capture: GoPro lets its’ users create near professional-quality action videos and as such, charges a premium price tag for its devices. With strong brand recognition through marketing and prominent athlete/corporate partnerships, strong customer demand for GoPro devices give the company power at the negotiation table. GoPro sells through traditional big-box retailers and maintains a substantial margin.

The (uncertain) future: A driving force behind GoPro’s decision to go public was the idea that, in the future, the company could generate additional revenue from the content created by its cameras. This envisioned “media” company has taken steps towards monetizing content, such as an Xbox live channel and various YouTube channels. Additionally, GoPro has built an extensive social media presence for which to monetize content on platforms like Facebook, Instagram, Vimeo and Twitter.

The future for GoPro is uncertain. Amidst various efforts to monetize all the digital content creation, GoPro remains a niche product that cannot sustain itself as a camera business alone. Each subsequent life cycle release of GoPro hardware will be less and less popular. New entrants are threatening their continued sales by offering short-term rental of GoPro devices. International expansion will continue to drive sales for GoPro but only time will tell how they respond to increased competition by low cost alternatives. 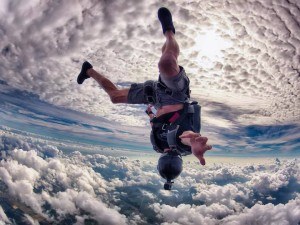