The fall of Blockbuster remains a classic example of digital disruption. Once valued at $4.8 bil and a dominate force in the rental market, Blockbuster filed for bankruptcy in 2010. By ignoring digital and going so far as to reject acquisition overtures from a fledgling Netflix, Blockbuster’s success would be its downfall. While many factors contributed to Blockbuster’s demise, I’d like to highlight two:

Distribution: A major weakness of Blockbuster’s position in 2000 was its brick-and-mortar distribution system with 9,000 stores and 60,000 employees at its peak (1). The infrastructure investments, combined with management’s bias toward the historical success of the brick-and-mortar strategy, restricted Blockbuster’s ability to innovate effectively and quickly. Furthermore, Blockbuster CEO John Antioco and his successor Jim Keyes both failed to see the power of online distribution until it was too late (Antioco responded to the rise of Netflix by opening more stores and Keyes sought to buy a failing Circuit City). In fact, Reed Hastings, founder and CEO of Netflix, approached Antioco in 2000 seeking to sell Netflix for $50 mil, to which Antioco laughed and said no (2). It wasn’t until 2004, a full six years after Netflix launched, that Blockbuster established an online rental platform of its own. The success of brick-and-mortar stores gave Blockbuster a false confidence that, when combined with the size of the organization and lack of vision from leadership, made Blockbuster slow to adapt.

Business Model: The cost of maintaining, staffing, and expanding their stores resulted in two main constraints: 1) costs did not scale well as each new market required heavy investment in a new location and 2) once a location was established, profits, albeit with high variable contribution, were tied with recouping the upfront capital investment. This caused a mismatch between the customer experience (e.g., low-friction rental and time to enjoy a VHS) and Blockbuster’s profit model (e.g., high rental turnover). To incentivize on-time returns, Blockbuster introduced high late fees which, before long, accounted for up to 70% of Blockbuster’s revenues (3). Blockbuster’s business shifted from renting movies to collecting late fees! Even after removing late fees in 2005, Blockbuster re-introduced them in 2010 to shore up revenues (4). An opaque late fee policy (which resulted in litigation against Blockbuster) and inconvenient customer experience ran counter to the customer value proposition, ultimately leaving a gap that Netflix filled. Netflix could deliver movies at a lower cost (bulk discounts on DVDs as well as centralized distribution hubs) and provide a subscription model that removed complexity surrounding fees, not to mention removing the frictions of returning DVDs to a store. 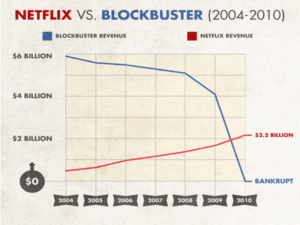 While Blockbuster offers a cautionary tale of the risks of not innovating, we can see similar trends in the media industry today. TV serves as a clear example. Before streaming and internet videos, the main broadcasters (ABC, NBC, CBS, and Fox) and cable companies had a near monopoly on TV content. The broadcasters made content decisions based on the lowest common denominator (cable companies had more flexibility around content types due to its pay-tv model and related regulation but had a similar philosophy when green-lighting shows). The adage of “being all things to all people” captures the ethos of network television. Broadcast networks fought to dominate certain days (e.g., NBC’s comedy block on Tuesdays) to capture the multi-billion-dollar TV ad market while cable companies had set viewing schedules of multiple channels for their expensive packages. The rise of digital platforms like Netflix, YouTube, and Amazon dramatically shifted the landscape in three ways:

While the drivers and impacts of digital media are numerous and nuanced (e.g., power shifting from licensed aggregators to owners of both creative IP and the platform), I’d argue that the fundamental change lies in market architecture. Similar to our case on Nokia, traditional media has struggled to adapt to the market structure of digital “new” media (see below). 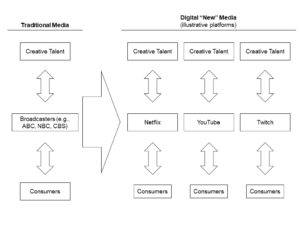 Not just Nokia – Another mobile phone loser in “Galapagos islands”

Student comments on A Blockbuster Failure and the Changing Media Landscape