The Open Office Revolution Has Gone Too Far 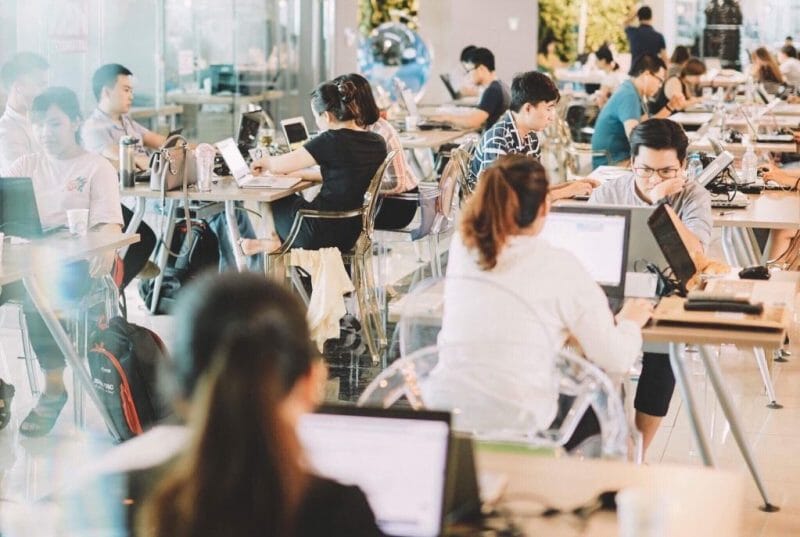 This article was originally published in HBS Working Knowledge.

As of this July, what do Isaac Newton, Charles Darwin, and Associate Professor Ethan Bernstein have in common? They’ve all published in Philosophical Transactions of the Royal Society B.

Bernstein’s new paper, The Impact of the ‘Open’ Workspace on Human Collaboration, is featured in the newest issue of the renowned British research journal, the oldest scholarly journal in the world dating back to the 1600s. This latest issue was organized around the theme of how architecture impacts collective behavior.

As its title suggests, Bernstein’s paper empirically examines the effect of open office architecture on employees’ interpersonal and electronic interactions. Working with co-author Stephen Turban, who was introduced to Bernstein by the late HBS professor David Garvin, their study yielded surprising findings about the potentially negative impacts of removing spatial boundaries in the workplace. Professor Bernstein took time below to talk about the genesis of this intriguing research and its implications for the office architecture of the future.

Christian Camerota: How did your interest in this research first come about?

Ethan Bernstein: There’s a lot of interest in open offices because so many of us work in them, and we have very strong opinions about them. They were all the rage in the late 20th century, and academic attention in them followed suit. But most of those studies were based on survey data (self-reported, by definition) and intangible outcome variables (like employee satisfaction). Those are fine for understanding individual perceptions, but aren’t so good at quantifying real behavioral responses and organizational performance outcomes from open offices. The gap between perceptions and real outcomes has now become the battleground for employees and employers on this issue.

“There’s a lot of interest in open offices because so many of us work in them, and we have very strong opinions about them.”

Much of my research is about the impact of workplace transparency (the observability of employee activities, routines, behaviors, output, and/or performance) on employee productivity and collaboration. So these questions interested me, as did new ways of answering them. Technology—in this case specifically, wearable technology—has enabled us to track individual or dyadic interactions at a really refined level. It’s not just “did you do this?” but “you did X, Y, and Z at this particular time with these other people.” If I was going to dive into researching open offices, I wanted to do it more empirically, tracking variables that were previously unfathomable to measure beyond proxies and guessing. The advent of wearables meant I could do exactly that.

What my co-author Stephen Turban and I were ultimately able to produce is the first work I know of that looks empirically at how interactions between individuals in headquarters change when employees move from cubicles to really open spaces.

Camerota: How did you decide to structure the methodology?

Bernstein:This study would not have been possible without my collaborator and close friend from the days of my doctoral studies, Ben Waber. After finishing his doctorate at the MIT Media Lab, Ben co-founded (and is CEO of) Humanyze, a company that uses sociometric badges to help companies use people analytics to improve how people work. These badges, and the multiple sensors inside of them, allow careful tracking of interactions in the workplace. Ben was kind enough to partner with us to help us measure, carefully and without affecting behavior, the interactions of individuals in two different company headquarters before and after a shift to truly open offices.

As with any research at HBS, we were careful: the same people were tracked before and after the move; we asked them to wear the devices for a long enough period of time that we were confident we were measuring meaningful, not idiosyncratic, differences while not going so long that we ended up capturing noise from other changes in the working environment; we were careful to compare apples-to-apples by ensuring, for example, that interactions were measured at the same time in the (quarterly) business cycle; and so on. If there was one thing our reviewers focused on, it was making sure that our results were robust!

Camerota:Did you have an idea of how the study would turn out?

Bernstein: Somebody once told me that business academics are the janitors of our field. Because out in the real world, practitioners do crazy and interesting things as managers and designers of their organizations. And then we, the academics, come around and try to figure out, rigorously, what had a positive and negative impact on performance and other behavioral variables. We collect and organize everything, plow through the data, and then develop theories that will help predict behavior in the future.

“My hope is that this research throws a bucket of ice water on the idea that there’s no tradeoff—that you will naturally both save in real estate costs and get more collaboration from this kind of design.”

I don’t know that I had a clear hypothesis about this research question at the start. You hear so much said about how much people don’t like open offices, but there’s also so much said about the vibrancy of an environment when you open space and data up, about the collisions and interactions that will happen there. For me, the promise of open offices was at least as compelling as the traps. Would everyone bustle with productive collisions, or simply put their big headphones on and become numb to the space? In reality, I was torn. One of the best parts about being a professor is that you can study the questions that are most interesting to you and the business world. And the mystery behind this question was a key reason this was so interesting to me.

Camerota: If you were a Fortune 500 manager and you read this paper, what would be your reaction?

Bernstein:It depends on what you’re trying to achieve with open offices. My understanding, from speaking with real estate managers and architects, is companies’ conversations about the built environment tend to start with cost per square foot. If the question is how to lower costs, the answer is more people per square foot, and open offices will always have the upper hand on that dimension.

Nonetheless, many managers and executives seem to believe that open offices will both lower costs and improve interactions. My hope is that this research throws a bucket of ice water on the idea that there’s no tradeoff—that you will naturally both save in real estate costs and get more collaboration from this kind of design. If the cost motive were sufficiently strong, there might be other things a manager could do to mitigate the potential negative impact on interactions: hybrid or flexible spaces; train people differently; allow work-from-home time; set a tone and work culture that tries to deprogram us from our natural instincts to respond the way these organizations did. There are those who love open offices, in part because organizations mitigated the downside with other deliberate managerial actions.

That said, in general, I do think the open office space “revolution” has gone too far. If you’re sitting in a sea of people, for instance, you might not only work hard to avoid distraction (by, for example, putting on big headphones) but—because you have an audience at all times—also feel pressure to look really busy. Indeed, all of the cues in open offices that we give off to get focused work done also make us less, not more, likely to interact with others. That’s counterproductive, at least given the rhetoric of open offices. Architects aren’t clueless to this, of course. It’s just that the cocktail of other considerations, like cost per square foot and the promise of innovative collisions, got too powerful for them to try to pull back from those extremes.

Bernstein: Ultimately, human beings get agency to decide how to use any space, so design is only part of the equation. I was recently in a meeting with several senior managers from a company known for its open office environments. One of them told me that the research did not reflect his experience—that they found open office spaces encouraged dynamic interactions and collective behaviors. His colleague then piped up and pointed out that all of the “noise” (as an indication of interactions) actually comes from behind the closed doors of the separate, team-based spaces. That should make us wonder: if all the noise is coming from behind closed doors, isn’t that where people are interacting and working well together? Wouldn’t you maybe want more of that?

Here is perhaps one way to summarize the shift in perspective that is suggested by this work. In the past, when it comes to workplaces, office design (and many other artifacts of organizational life) have catered to the observer and not the observed. Unfortunately, it’s the observed who make our organizations successful. So maybe everything, from office design to people analytics, ought to shift slightly in mindset to optimize for their work more often.