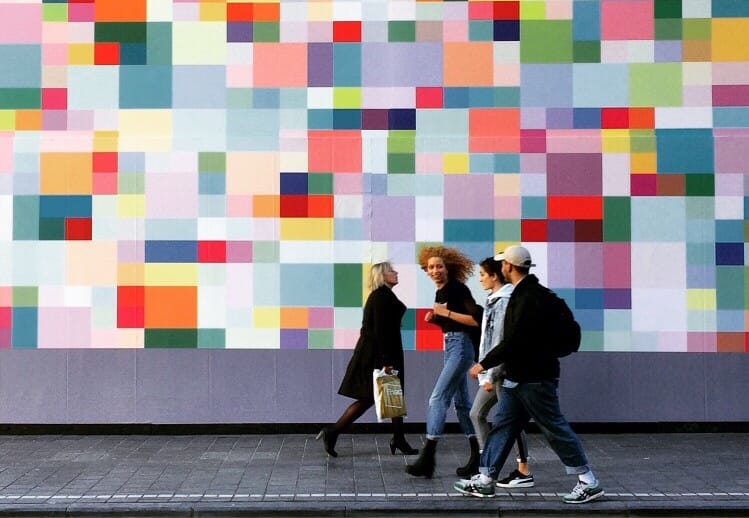 In the mid-1990s, Target was a discount superstore behemoth.

The retailer had set itself apart from chief rival Walmart with a focus on more upscale but wallet-friendly fashion and lifestyle lines, spurring double-digit growth by double-digits each year for more than a decade.

That fruitful streak came to an abrupt halt with the United States financial crash in the fall of 2008. Target was hit hard—much harder, in fact, than Walmart. Five years later the company was still struggling.

“Target had to make this big shift from thinking only about retailing to also thinking about data. And to do that, data had to become the big asset they needed to develop to provide new opportunities,” Datar says. “Even today, not all retailers have embraced data fully to the point where they think of themselves as data companies, and it might be why many companies are suffering.”

Several traditional retailers are indeed tripping over the digital divide. JC Penney has been tanking, with shares recently trading at $1.50. And in October, Sears filed for bankruptcy protection, following the dark road paved by Borders, RadioShack, and Toys ‘R’ Us.

“Target had to make this big shift from thinking only about retailing to also thinking about data.”

Target, meanwhile, managed a startling recovery from its five-year slump. The company’s third-quarter sales increased by more than 5 percent over last year, and in August online revenue showed especially high growth of a whopping 41 percent—the firm’s highest gain on record.

Fascinated with Target’s stunning turnaround, Datar studied the calculated steps it took to fuel its success.

In 2013, the one bright spot in Target’s otherwise bleak financial picture was its then-small e-commerce arm. Although overall sales declined, online business soared nearly 30 percent between 2012 and 2013.

Target was awash in customer data from these online sales, but to make sense of it, the company needed to bring in the right people. Paritosh Desai joined Target in August 2013 as vice president of business intelligence, analytics, and testing, and he then went on a hiring spree, growing the analytics team with data scientists and others trained in computer science, math, statistics, and physics, including many who held doctorates.

To attract the best people, Target knew it had to keep at least part of its data operation in Silicon Valley, even though the company’s corporate offices were in Minneapolis. “It was a big decision to stay in Silicon Valley,” Datar says. “The demand for data-science professionals is through the roof, so you have to go where the experts are. Desai credits the success of data science at Target to this team.”

Desai created an entrepreneurial culture, knowing experimentation would be critical to discovering how data could be woven into the company’s business practices. His colleagues followed this mantra: develop, test, measure.

Yet they couldn’t just continue with experiment after experiment without applying what they learned—and quickly. “If you just keep experimenting, people [in the company] will say, when do the sales come in? You don’t have that much time to keep trying,” Datar says. “The only solution is to learn fast, take action, and continue to build on your learning.”

Deliver a mobile response in milliseconds

Desai knew from previous experience leading data science at Gap Inc. that consumers get frustrated with slow mobile apps. To him, the most important engineering requirement was providing users with a response to their search in milliseconds consistently.

“The only solution is to learn fast, take action, and continue to build on your learning.”

Just as important, the response had to be relevant to that customer. If a consumer searched for “sneakers,” the site should not only provide a list of sneaker-like shoes, but at the top of the list should be the particular brand the user purchased in the past.

A successful customer interaction on Target.com was narrowly defined: Only when a customer searched for a product, received recommendations, and actually purchased the product would the company bother to drill deeper to test which banner designs worked best to push a sale through.

And if a customer didn’t buy after browsing, the team asked questions: What information was the customer missing? Was there something in the customer’s purchase history that Target should have known that would have blocked the sale?

“Only searches that led to sales of recommended products in the same session were considered statistically significant and quantifiable,” Datar says. “By setting the bar that high, you remain humble about what you can learn from both successful and unsuccessful transactions.”

Desai wanted the team to help managers in the field make smart business decisions based on data. Those managers were encouraged to develop questions that could produce value if analysts could massage the data to provide accurate answers. For example, a manager might ask: Did a dish detergent promotion boost sales, or would customers have bought the detergent anyway?

“The folks who had the data did not go to the managers and say, ‘I have all this data. Let me tell you how to run your business now.’ They said, ‘Look, let me understand the key questions you would like to have answered with data,’” Datar says.

As the team worked with analysts and managers, the questions became so sophisticated that an engineer might be required to develop a tool to answer them. The engineer had to work quickly. “Retail is always changing so fast that you can’t wait three weeks to get an answer,” Datar says. “The engineer might have to build the tool and provide the answer in an hour.”

The alliance between data experts and managers was a good start. But Desai knew that if managers had to wait in a queue for an expert every time they had a question, they might grow weary of asking. The solution: allow managers themselves to work with the data. That meant creating a flexible analytics system that could not only adapt to real-time business changes but one that managers felt comfortable using.

“He didn’t want to be the bottleneck. It took vision and humility to say, ‘The answer doesn’t have to come through me and my data science team,’” Datar says. “It was a bold decision because it was much costlier and more complicated to design flexible architecture that managers could easily interact with.”

In the early days of e-commerce many retailers made the mistake of treating their online unit as a mere add-on to the store. Target, by contrast, spent much time focusing on how data could be used specifically to help build its web arm. And the retailer was careful to establish the value of data, analytics, and algorithms for the e-commerce site first before scaling up its capabilities to make decisions and solve problems in other areas of the business, such as marketing, store sales, and the supply chain.

But when the time was right, this data-analytic approach would help dictate a variety of decisions for Target, including which products earned precious shelf space inside its brick and mortar stores.

“Target realized the importance of devoting the time, attention, skill, and strategy to developing data and analytics competencies in a critical part of the business—its e-commerce site—before rolling out these capabilities more broadly,” Datar says. “I think that’s a big reason why Target’s adoption of a data-driven approach has been so successful.”